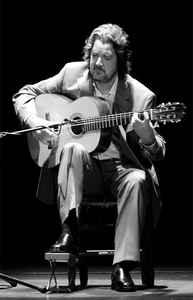 Since 1977, when he won the Ramón Montoya Prize for Concert Guitar in Cordoba, at the age of only fifteen, he has had a serious, consequent performing activity. An exquisite musician, composing and concert performance are important facets of his work, at live performances and in his record catalogue, although he has not ceased to accompany cante, as he is convinced that "it is very important for the solo guitarist to know the cante, because that is what provides firmness when playing alone". Riqueni has performed extensively as a concert guitarist and has played with people such as Enrique Morente, Anouar Brahem, Al Di Meola, Matías Fray and the Vargas Blues Band. He is also a noted flamenco composer, similar to the style of Albéniz and Turina. His 1987 album simply entitled "Flamenco", was recorded live without any special effects or recording studio tricks. He is an imaginative, fertile creator and his work has that unequivocal aroma of Triana where he was born. "Suite Sevilla" is a very ambitious, beautiful creation that is not actually flamenco, as it also draws near to Spanish classical music, and in fact he performs it with the classical guitarist José María Gallardo. In 1999 he published an excellent book and video teaching the flamenco guitar. His last album "Alcázar de cristal" is a work of art that combines pure flamenco sounds with more elaborate string aarrangements. After 15 years of silence Rafael Riqueni is finally back and his new album "Parque de María Luisa" is expected to be released in early 2012.