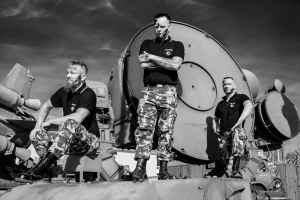 August 3, 2018
I Thought I´ve died and gone to heaven when I Heard Funker Vogt the first time, the best in this style :-)
I also recomend. Icon of coil, Mindless faith and of course VNV Nation.
Try my Spotify playlist: `EBM only true and pure´ if you´re new to EBM .-)
Reply Notify me 1 Helpful

May 3, 2017
Funker Vogt is, without a doubt, my favorite band of all time for numerous reasons. I still believe that to this day, they are one of the best industrial acts going. From their debut back in 1995, they introduced a sound that had never been heard before and maintained their own unique flavor all the way up until present day.

While post Execution Tracks in 1998, their style changed and adapted somewhat to compensate for present times, they continued releasing heavy striking club hits again and again with each album they continued to release. Despite not discovering Funker Vogt until the release of Navigator in 2005, every one of their albums from earlier and later years have never failed to impress to impress me, whilst some were definitely better than others, each album has it's own unique atmosphere and feeling, most notably Survivor in 2002 marking a new era in Funker Vogt's musical direction.

Unfortunately from Companion in Crime (2013) onwards, Jens Kastel is no longer a part of the band and has moved on to a new project called The Firm Incorporated, though this didn't mark the end for Funker Vogt itself, Gerrit Thomas continued the project with a new vocalist known as "Sick Man" along with the new EP named after the new vocalist himself, which was a brilliant track. Despite the high quality of the EP itself, the new singer himself turned out to be a somewhat controversial man in the German music scene. Due-to some backlash from fans and critics alike, Sick Man departed from the band almost immediately after the release of the EP.

As of 2017, another new vocalist was announced: Chris L. of Agonoize fame. A new album (Code of Conduct) and a new EP are currently on the horizon, hopefully bringing back that old school Funker Vogt feeling even without Jens himself.

Any fans of the industrial genre would be wise to investigate the entirity of Funker Vogt's back catalogue, though if you haven't heard of them by now, you've likely been living under a rock given their titanic stance in the German Industrial scene.
Reply Notify me Helpful

January 23, 2016
Vinyl issues of Funker Vogt would be really nice. Also, I like Jens better than Sick Man.
Reply Notify me 3 Helpful

I will agree that Funker Vogt are one of the best industrial acts of today, but I think that in order to find their best material, you have to look further back than Execution Tracks (1998). ET is still quite an album, and easily their most well-known one too, yet I feel that it was We Came to Kill (1997) when they were in their prime. Thanks for Nothing (1997) was full of great, aggro industrial/ebm, as well. After/around ET, everything sort of changed, and the band adopted a more electro-industrial sound, which was gaining in popularity at the time. Maschine Zeit (2000) and Survivor (2002) had some decent tracks here and there, but they lacked solidarity, as the music became less dark and more predictable. The vocals were still good, but the lyrics were downright silly at times (“Fallen Man,” “Final Thrill,” “Nothing to Include,” etc.). It will be interesting to see how the band progresses and evolves from the point they are at now.

The band was still great to see live on their Revivor tour; tons of energy.

April 29, 2004
Funker Vogt is probably one of the best industrial acts out there today. The production is great, the distorted voices adds a very creepy industrial feel. The lyrics in their songs is what catches your attention. I think their best album is Execution Tracks....especially Tragic Hero -- one of their best songs ever.
Reply Notify me Helpful