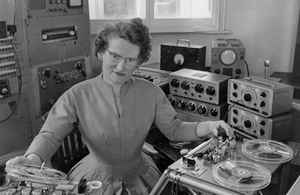 Real Name:
Daphne Blake Oram
Profile:
Daphne Oram (December 31, 1925 – January 23, 2003) worked for the BBC from 1943, first as a sound engineer, later as the co-founder and director of the BBC Radiophonic Workshop. Oram left the BBC for good in 1959, moving to Tower Folly, an oast house she had purchased in Kent, in order to make her own music, beyond just creating sounds to be used as special effects. She also created a musical machine that converted pictures into sound, known as Oramics, which she later continued working on with the onset of the home computer revolution in 1981. After suffering a stroke in 1994, she was forced to give up her work, and retired to a nursing home where she died on 23 January 2003, aged 77.
Sites:
daphneoram.org, Wikipedia, Bandcamp
In Groups:
BBC Radiophonic Workshop
Variations:
Viewing All | Daphne Oram
Oram