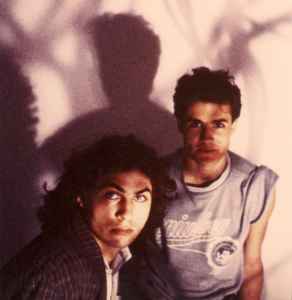 In 1985 they released their first single, "Paula", second single "Stockholmssommar" and album "Power Of The Century". They released a couple more singles from the album with 12" singles to match.

In 1987 they returned with the album "In The Mist Of Time". Just after the release, Jonas Zachrisson decided to leave the band.

Their last release as Nasa before the name change was the single "The Bird" which was their biggest chart hit. The 12" sleeve featured the names of all the members of their fan club.
A video was aired on the TV show "Video Grattis" on August 23, 1987.

The band got a record deal with U.S record company Columbia, who thought that "Nasa" had a bad ring to it after the Challenger accident. It was suggested that the band were going to be renamed "Walkabout".

They went to the U.S, started to record a new album, which was slated to be produced by Robert Margouleff, featuring old Nasa tracks with a planned release in 1988.

The label rep who had signed them got a new job, and the replacement didn't think they were worth the time and effort. After the album was completed the master tapes were never released and remain in the custody of Columbia.

In 1989 the two remaining members launched the side project Henzel & Thors. According to Patrik Henzel, the album was originally written in English, but was later translated into Swedish. The English versions only exist as an uncirculated demo tape. The first single was "Sov Gott" which got airplay on Swedish radio, followed by two more singles. Promo videos were made for Sov Gott and Desertören. Each of the three singles featured non-album b-sides.

The compilation CD. Echoes Down The Hall was released in the autumn of 1998 by Memento Materia. 16 songs of which two were unreleased versions of old tracks. There were plans to rerelease Power Of The Century on CD, Memento Materia even assigning it a catalogue number: CD Memo 033, but it never materialized.

In October 1998 Nasa got together to perform their first concert in 11 years at Club Arnold in Lund, also premiering a few new tracks.

In April 1999 they performed at the SEMA awards in Gothenburg, with old and new tracks. The single Back To Square One was released and backed up by a promotional video.

The album Remembering The Future was released in the late summer of 1999. The single Nexterday was slated for a late autumn 1999 release but was delayed to April 2000. Dave Richards of U.S label Ninthwaverecords signed Nasa for a U.S deal in late spring of 2000.
Sites:
bronsdon.net, books.google.se
Members:
Jonas Zachrisson, Martin Thors, Patrik Henzel