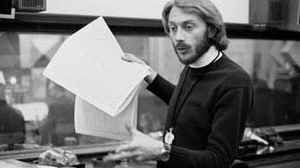 Real Name:
François de Roubaix
Profile:
François de Roubaix (1939-04-03 - 1975-11-21) was a French multi-instrumentalist and composer for commercials, TV series, and about 30 feature-length films. He died aged 36 in a diving accident near Tenerife (Canary Isles). After discovering jazz music in 1954, he started playing trombone in Parisian bars, becoming friends with actor Pierre Richard in the process. It soon turned out he had a great sense of melody and sound, and how to mix instruments. He scored his first film in 1965, moving into the world of soundtracks. In 1972 he was one of the first to install a home studio which he used a lot for both experimentation and finalised tracks, often working its 8 tracks with engineer Jean-Pierre Pellissier. FDR freely combined classical (prerecorded) music with electronic instruments, early synthesizers and rhythm boxes. He is perhaps best known for his music for tv series Commissaire Moulin and Chapi Chapo and for the films La Scoumoune and Les Aventuriers and the oft-sampled Dernier Domicile Connu. Indeed, after his death FDR received new recognition because his music provided sample material for a new generation. For instance Carl Craig remixed him and Robbie Williams' producers sampled him. He also made two soundtracks for erotic films under the Cisco El Rubio pseudonym. His last soundtrack was Le Vieux Fusil, for which he was awarded a César (French movie industry award) for best soundtrack music on the day he would have turned 37. In 1977 he received another posthumous César award, this time in the category best movie short, for "Comment ça va je m'en fous". Had he lived longer, he would have fulfilled his life long desire to make & direct more films himself.