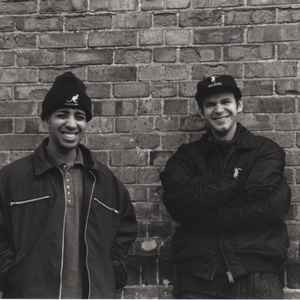 Alex and Danny met when Alex moved to Beccles aged 14. They became friends along with JMJ (Jay Hurren) & Richie (Andrew Riches) and started going out raving, DJing and producing. In 1990 Alex wanted to update his studio, Danny got a loan to enable them to do this and Hyper On Experience was born. They split up in 1994, with Alex being asked to record an E-Z Rollers album with JMJ and Danny going solo as Flytronix.

December 24, 2020
If I want intelligent chaos, I go to these guys, Gachet tore the place up with their tunes

September 30, 2013
i am looking for "Hyper On Experience - Timestretch" but i cant found it. can anybody tell me the track id?

these guys had very smart production and their sampling was top notch. they practically defined sampladelic hardcore. it's no accident tunes like the frightner and lord of the null lines went on to be so famous. their music was infused with vivacious energy and raucous fun that could only have happened in the ecstatic days of uk hardcore. however they did go on to reveal a variety in their productions with records like disturbance and ouiji awakening, which were darkly tinged and had more of a junglistic edge.

April 16, 2010
The UK rave scene around 1992 was fractured. Techno was going underground. If you wanted 4/4 rhythms you either listened to the sound of Europe or waited until Slipmatt invented Happy Hardcore a year later.

Breakbeat was getting faster. With this came a lot of noise, and not in a good way. Where faster straight 4/4 rhythms would eventually settle into the Happy Hardcore / Gabber 180bpm territory, breakbeats seemed to be getting out of control.

Hyper On Experience came to show everyone how it COULD be done. From their well known anthems such as Assention (To The 9th Level) and Lord Of The Null Lines, to lesser known tracks like Monarch Of The Glenn (that actually paid homage to Happy Hardcore) they helped to set a blueprint for drum & bass, albeit with a much more insane & uplifting vibe.

Their intelligence in production was comparable to very few. Think along the lines of Acen, 4hero and Nebula II. This was not a band who threw together samples without serious consideration.

Not just a band to investigate for people into drum & bass (and even Dubstep), but also for fans of intelligent, hard edged dance music in general.