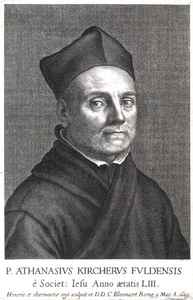 Profile:
Athanasius Kircher (born 1601 or 1602 in Fulda, died 1680 in Rome) was a German Jesuit scholar who published around 40 works, most notably in the fields of oriental studies, geology, and medicine. He also invented the first megaphone. Other machines designed by Kircher include an aeolian harp, automatons such as a statue which spoke and listened via a speaking tube, a perpetual motion machine, or a cat piano which would drive spikes into the tails of cats which yowled to specified pitches, although he is not known to have actually constructed the instrument.

The "Musurgia Universalis" (1650) sets out Kircher's views on music: he believed that the harmony of music reflected the proportions of the universe. The book includes plans for constructing water-powered automatic organs, notations of birdsong and diagrams of musical instruments. One illustration shows the differences between the ears of humans and other animals. In "Phonurgia Nova" (1673) Kircher considered the possibilities of transmitting music to remote places.

In 2015 Louis Andriessen composed Theatre Of The World, an opera about Kircher subtitled "a Grotesque Stagework in 9 scenes".
Sites:
Wikipedia
Variations:
Viewing All | Athanasius Kircher
A. Kircher, A. Kirker