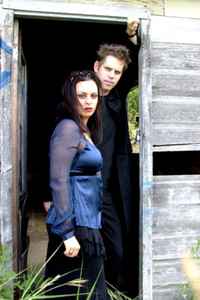 The Machine In The Garden

Profile:
The Machine in the Garden is a gothic/darkwave duo featuring Roger Fracé and Summer Bowman. Since their formation, Roger and Summer have developed and advanced their unique style through years of collaborating and intertwining their musical tastes.

The band's first release was the 1994 Veils and Shadows EP. Initially a solo endeavor by Roger Fracé, the debut EP blended the dark elements of goth with new wave and industrial tinges. However, folded within the songs were melodies of a more classical nature.

The band's sound further evolved with the addition of musician Summer Bowman. Her enchanting voice lent an ethereal quality to the music on the duo's first full-length recording, Underworld, in 1997. The dark electronics of the debut EP, which garnered acclaim from press and radio, were still there, but multi-layered with an atmospheric mood and style, giving the CD an original sound transcending pre-existing genres.

Following a string of successful singles on various compilations, the band signed with Middle Pillar Presents in 1998, releasing four full-length CDs over the next eight years.

2007 marked the 15th anniversary of Fracé's formation of the band as well as the 10th anniversary of Bowman's joining. For this special occassion, the band released XV, a special limited-edition CD, in December 2007. XV includes 15 tracks spanning the band's 15-year history, including demos, remixes, previously unreleased outtakes and two brand-new songs.

The name "the Machine in the Garden" refers to the progress of technology and its relationship with nature. Each release explores this relationship between the mechanical, natural and spiritual worlds and further elucidates the philosophy behind the band.
Sites:
tmitg.com, Bandcamp, Facebook
Members:
Roger Fracé, Summer Bowman
Variations:
Viewing All | The Machine In The Garden
Machine In The Garden