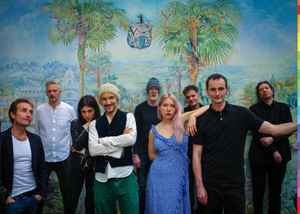 Profile:
James is used for this band - anything else needs its own artist name. Please do the necessary research and determine which "James" you are looking for.

May 29, 2021
I would really like somebody in "James" or their management team to consider issuing both mini albums "The Morning After....The Night Before" on Vinyl, in addition to all of the odd tracks and alternate acoustic versions that have only ever been and are still being released as download files; on a physical copy of some kind, whether that be on LP or CD & if it is not too much to ask any acoustic or unplugged / radio station type appearances on CD and/or DVD. This would I am sure, allow the anal "James" collector (which includes me, who never downloads anything) to complete their collection on both LP & CD and also the latter, would make a fabulous box set of rarities, furthermore, what about a super deluxe box set of Live LP's (Getting away with it....Live & Live in 2008 maybe even include the rare Live & Acoustic stuff from 1990's) aside from the fact that it allow us the "James" fans to get their hands on stuff to complete the collection, it may even generate additional sales for the band.....................& as Depeche Mode said, "Just Can't Get Enough" I can't for sure.
Hopefully the powers that be will get wind of this and...............maybe !
many thanks
See 1 reply

November 23, 2018
Seven is a masterpieces of gritty, intelligent British alt rock replete with grooves, horns and brilliant evocative lyrics. The music is intense without being overly preachy and alternative enough not to be sh*t like Nirvana which I cannot stand. They where leagues more talented as far as alt rockers of the 90s where concerned.

Tim Booths project with Angelo Badalamenti is also something of worth titled "Booth and the Bad Angel". I think James hit a pinnacle with Seven Born of Frustration is a real high energy number. I miss the 90s!