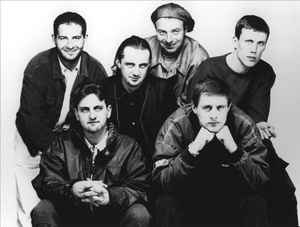 Rock/Acid House fused group, formed out of the "madchester" scene of the late 1980s to mid-1990s.

Legendary for their on/off stage antics, usually fueled by drink and/or drugs. Both lead singer Shaun Ryder and Bez (Mark Berry) were renowned for their drink and drug fueled antics. Bez being the legendary member whose sole purpose was to dance in his own inimitable style on stage at their live gigs.

One story of interest was when they went to record in Barbados at the studio at Eddy Grant's house, which ended-up being the album "...Yes Please!", after managers thought it would be good to get them away from the drink/drugs scene they were surrounded by in the UK, not realizing the massive drugs problem Barbados had at the time, meaning band members were found trying to sell much of the studio equipment to continue their binge!

January 25, 2017
After all this time it's the Mondays that sound best of the Manchester lot - and they were always good as you will find if you go right back to their first eps on Factory.
The band was a big marquee for indie / dance / acid house, more down to earth and less studied than the Roses, harder to categorise, but always fun, irreverent and devil may care.
Great bass lines, funky guitar and incisive drug lyrics formed their tunes into a new hybrid, perfectly matched to the times, amazing synchronicity with them / Factory / E / Acid House / Hacienda.
All the books on them are a riot to read, especially Bez's Freaky Dancing!
Best British band of the times, along with the Roses and the Valentines.

December 22, 2016
If the Stone Roses added a Beatles-esque tunefulness to the Madchester melee, then the Mondays brought with them the swagger of the Stones. Reckless, lawless and, if legend is to be believed, regularly legless, their piratical smash'n'grab on urban gloom, drug rock excess and acid house euphoria inspired a generation to 'get on one.' If they peaked with the string of singles released from third album Pills'N'Thrills'N'Bellyaches, their bleak comedown album follow-up Yes Please! produced by Talking Heads' Chris Frantz and Tina Weymouth remains a lost classic. Irregular reunions have failed to dim their wayward legend. Before becoming lead singer believe it or not Ryder worked as postman taking acid on his round until eventually getting sacked for biting a dog!!...says it all really!
It seems the Royal Mail played a large role in the Happy Mondays generally. Shaun’s brother Paul also joined up as a postie 18 months after Shaun. Peter Hook claimed he got the Happy Mondays their first gig at The Hacienda when his “postman” Paul handed in a demo tape. Mark Day, the band’s guitarist, was also a postman and when in 1989 the band played Top of the Pops with the Stone Roses, Day had to hot-foot it back to Manchester in time to do his post round in the morning!
Derek Ryder, Shaun and Paul’s dad, was involved in the band from the early days and as soon as the band could afford to match what he earned at the Post Office, the Ryder brothers hired him as their road manager.
Reply Notify me 1 Helpful

October 21, 2013
cant believe there is only one review posted about this mental lot.. Well what can be said about the mondays that hasnt already been said. Working class scallies who hit the big time after being noticed by the late great Tony Wilson during a competition at the hacienda one night. From that moment the rest they say is history , and mondays rightly earned there place in the rock n roll hall of fame. Looking back now they are without doubt one of the greatest british bands of all time,,, and for millions they will forever be remembered as cultural icons and working class hereos.. There is no other story in the music world that comes close to that of the mondays,,,, from rags to riches then finally pressing the self destruct button in barbados,,,, then unbelievably coming back as black grape when everyone said they were finished,,, because really black grape were the mondays anyway. It wasnt until 1990 that the world started to sit up and take notice after they produced there brilliant third album pills, thrills, and bellyaches, but talk to any proper happy mondays fan and they will tell you that they had a massive following long before that. The first album in 87 squirell and g man was around the time the acid house revolution began to kick in, and even that first album has a dancy feel to it,, working class funk mixed in with indie rock, this album realy is a forgotten masterpeice with the pick of the bunch being Tart Tart, along with a big favourite of mine Little Matchstick owen. This album clearly shows what they were about in those early days before the rave scene changed there style. The second album bummed a year later is completely different to the first album but again is another work of genious and more even more dancy with a definate E sound, Then the third album is the mondays tribute to the rave scene and there love of ecstasy,,, the album that every raver up and down the land owned,,, forget screamadelica by primal scream two years later this was the album that defined a generation. All three albums are superb and completely unique,,how many bands can you say that about??? But the mondays were unique, no one had ever sounded like them and no one ever will, not only was the music unique but everything about the band was different,, the clothes,, the style, the attitude,, they were the coolest band the world had ever seen and shaun ryder was the coolest man on the planet. He had the atttude and the swagger that so many have tried to impersonate since, Ian brown and Liam gallagher included but none of them pulled it off with the same class,, Ryder was the real deal. Onstage spouting off mad lyrics alongside the freaky dancing of his best mate and partner in crime bez they woulld own a venue,, this alongside the drugs and the we dont give a fuck attitude made them pretty much untouchable.Whilst every politician would be demonising the rave scene,,, shaun and bez would continually be seen off there nuts on E,, peaching hedonism and saying to every raver take no notice of them keep on raving cos this aint gonna last forever. Every raver and 24 hour party person idolised them,,,Shaun was there voice while Bez was the reminder of what they would be doing on saturday night and in years to come would be the flashback of time when they had the best nights of there lives. But even long after the rave scene died, even today the music still sounds just as fresh and as awesome as it ever did. Quite simply there will never be another band like them,,, lets hear it for the Happy Mondays
Reply Notify me 8 Helpful

October 29, 2008
The Happy Mondays are an Indie band from Salford, greater Manchester. Their music is a pastiche of Disco and psychadelic rock. This is evident in their classics such as 'Tart Tart', 'Fat Lady Wrestlers', Kinky Afro and 'Sunshine and Love'. And Shaun is the greatest poet sinse Yeats. Despite their obvious influences, they were trend setters, they weren't followers and no other band sounded like them, Ryders lyrics make little sense if any to his audience but they fit brilliantly with Paul Ryder's funky basslines and Mark Day's wacka-wah guitar. Their music grabs you and says 'we know we're cool and we don't give a monkeys toss what you think'.
Reply Notify me 6 Helpful