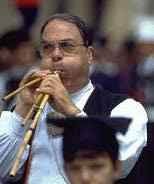 Considered by many as the best performer still in activity, Lai was a pupil of Antonio Lara and Efisio Melis. When he was young he had to migrate in Switzerland, where he lived for fifteen years, without giving up his player activity. Come back to Sardinia, he has undertaken his career of professional performer, making an intense concert season activity, featured by many participations and innovating collaborations with other musical realities ( it is famous the one with the italian singer songwriter Angelo Branduardi).
In Groups:
Oni Wytars, Sonos 'E Memoria, Sonos 'E Memoria And Friends
Variations:
Viewing All | Luigi Lai
L. Lai, Lai, Luigi Laï