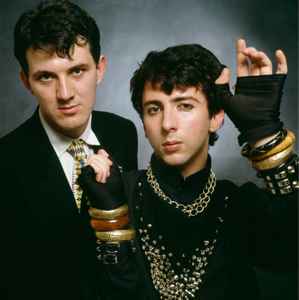 Profile:
Soft Cell was an English synthesizer duo during the early 1980s (later re-formed) of Marc Almond (vocals) and David Ball (keyboards).
Their lyrics often focused on love and romance as well as the darker side of life, with subjects such as the nightlife, kinky sex, transvestism, drugs and murder. They had a huge world-wide hit in 1981 with a cover version of "Tainted Love", a northern soul classic originally sung by Gloria Jones (the wife of Marc Bolan), that they followed up with more charting singles and one of the first remix Albums 'Non-Stop Ecstatic Dancing'. Their self-penned non-album single 'Torch' missed the No.1 spot of the UK charts with a hairbreadth.
'The Art Of Falling Apart', produced with Mike Thorne and the then new CMI Fairlight at hand with endless efforts by Dave Ball aiming at perfection followed in 1982. It spawned two singles chosen against the will of the record companies; 'Where The Heart Is' and 'Numbers' the first on youthful frustration, the later about frequently changing sexual partners and neither sold too well.
The commercial pressure finally collided with their artistic ambitions which led to solo and side projects and two farewell shows in January 1984 even before 'This Last Night In Sodom' was released.
They reunited in the early 2000's and toured with a 4th studio album following in 2002. Once again they reunited for a final well documented 'Say Hello, Wave Goodbye' live show in 2018 and the recording of a new single.
A new studio album is scheduled for spring 2022.
Sites:
softcell.co.uk, marcalmond.co.uk, Facebook, YouTube, instagram.com, Twitter, discog.info, Wikipedia
Members:
Dave Ball, Marc Almond
Variations:
Viewing All | Soft Cell
Sofet Cell, Softcell, Solt Cell, The Soft Cell, ソフト・セル

Can't agree enough with ttooyyss's review below me. So much more than just a Tainted Love. Not praised enough for being one of the first nihilistic provocateurs disguised as pop. Marc Almond raised very important topics of existential crisis, urban despair, the darker side of neon-coated hedonism and prostitution. Though he can be slightly edgy and too horny at times (as it was the case with some cringy songs on the 1st album), most of his texts are surprisingly witty and clever for a guy in his early 20s. Some of his songs are "simply-unsimply" life-changing. Dave Bull's electronic minimalism is exemplary in all things syth-pop. "The Art Of Falling Apart" is a masterpiece of an album.

October 9, 2018
Soft Cell 1978-2018 RIP.
They have released some great stuff in the 21st century.
Check out 'Divided soul' and 'Somebody, somewhere, sometime' from 2002.
Their 2002 album 'Beauty without cruelty'.
Finally their 2018 newies including 'Northern lights' and 'Guilty ('Cos I say you are)'.
The farewell concert on 30/09/18 which was their biggest headlining gig by far was superb! I caught it at the cinema
See 1 reply

January 22, 2013
There was NOTHING like Soft Cell! The dramatic delivery, the instumentation, the exciting sound, the minimalist approach (now I see it like that), the maximalist output, the super-taste for the sonic timbres. Nobody in the synth-genre was ever able to create anything similar. Super genuine, extremely powerful, organic. Non-Stop erotic Cabaret -era was the real thing. We would die for getting more and so am I even a bit today. It would be a very good idea to dig out hidden tracks, mixes, studio-outtakes, bits and pieces from them. We'd be thankful to the great Mike Thorne!
See 1 reply