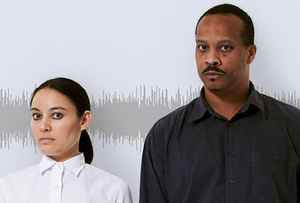 May 13, 2022
Let's face it. 95% of this is pretentious crap that nobody listens to. It's music for nerds who collect music rather than actually appreciate it.
Reply  See 1 reply Notify me Helpful

Dopplereffekt are from Detroit. Their electro-style resembles that of Drexciya, though it feels colder and the production is better (at least when compared to Drexciya's masterpiece 'The Quest' which was recorded rather poorly). The record feels cold and clinical though at the same time it can be very funny: 'We had to Sterilize the Population' said by a robot-voice ranks amongst my favourite lyrics in any genre!
The music obviously reminds me of Kraftwerk, though the emphasis in their lyrics or songtitles tends more towards sex or (alien) domination (through technology). The music is dark, minimal, cold and funny at the same time. They apply their few sounds like a surgeon cuts with his knife (or razorblade for that matter!). Thus they achieve maximum impact upon the unwary listener. The music isn't fast as in 320bpm-fast, but it feels extraordinarily 'hard' and edgy. Strong stuff for sure. But served with the right amounts of irony and cynicism to top it off. Their Gesahmtkunstwerk really is a perfect record and one of the few worthy! extensions to Kraftwerk's own impressive catalogue. A classic! 10/10