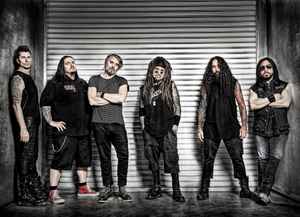 Profile:
Ministry is the brainchild of Al Jourgensen. Beginning in 1981, playing synth-pop with a strong disco influence, they released their first 12" on Wax Trax! Records, before being signed to Arista and releasing their debut "With Sympathy," in 1983. After a falling out with the label and the direction of the project, Jourgensen returned to Wax Trax! Records to release a series of 12" Singles, including "All Day / Everyday (Is Halloween)," which became an instant club favorite and would go on to become one of the band's most popular songs.

Jourgensen then signed to Sire/Warner Bros. Records in 1985. Ministry's second album "Twitch," was produced by Adrian Sherwood, and had a more menacing sound reflecting Jourgensen's interest in the international EBM (electronic body music) scene of the time. Ministry's third album, "The Land Of Rape And Honey," (1988), was both a natural evolution of their aesthetic and a sharp break with previous pop tendencies and, with the arrival of Paul Barker and other new members, Ministry's sound developed into a crossover between EBM, industrial, and heavy metal. Their experimentation with heavy metal was then continued with the following "The Mind Is A Terrible Thing To Taste," (1990), where the guitar began to take on much more importance to their sound. Ministry's breakthrough album, "ΚΕΦΑΛΗΞΘ," (1992), was a very dark, powerful, and violent album, that saw the band moving further into thrash metal while still retaining elements of industrial music and noise. The following records "Filth Pig," (1996), and "Dark Side Of The Spoon," (1999), showcased a much more straightforward heavy metal sound, to lower sales than previous records. The band released their first best of collection entitled "Greatest Fits," (2001), and were then dropped by Warner Bros. Records.

In 2003, the band then moved to Sanctuary Records and released "Animositisomina,". Paul Barker left the band in January 2004, leaving Jourgensen to put together a new line-up for "Houses Of The Molé." After the 2004 "Evil Doer Tour," there was yet another change in personnel with Prong founder Tommy Victor on guitar and Paul Raven (who had also played in Prong and in Killing Joke) on bass. In May, 2006, Ministry released "Rio Grande Blood," which was quickly followed by what was announced as their final album, "The Last Sucker," in 2007, and a collection of covers entitled "Cover Up," in 2008.

May 20, 2019
I don't get everyone saying/insisting Al should stop doing what hes always done. I'm a fan from the early days and am not really into the more recent releases either, but...None of you have to pay any attention to what he's doing. If no one was interested - I doubt he would do it. Some out there are interested, and clearly, get enjoyment out of what he puts out, and he has the right to continue his career as an artist/musician. Why this bothers any of you is beyond me. Guess its cool to publicly trash those you once looked up to because he did what? Put out music you no longer liked? If you liked what he did up until year X, then be thankful for how it enhanced your life and move on to other things. All this bitching is beyond me - go live your life. Better yet - go put out "better" music instead of bitching about other artists output. Its fine to have opinions. I think a whole ton of music is total shit - and I have become disinterested in artists I was once in love with, but somehow I feel zero desire to go on a public forum where fans of said music may gather, and proclaim it to a bunch of strangers, never mind call for an artist to stop being an artist. Weird, that so many here feel so inclined.
See 2 replies

February 16, 2018
Unfortunately Uncle Al went mad somewhere around 2012... While a big fan of even his then-recent work, I would consider anything starting from Relapse the work of another Ministry, one that sucks... How the mighty are fallen. :(
See 3 replies

December 13, 2017
Uncle Al and crew continue to pump out albums and tour the world. AmeriKKKant and tour coming March 2018. Never stop, you can rest when you're dead. Ministry fan for life!
See 3 replies

Well...
Al Jourgensen, one of my greatest musical heros of all time who once used to be a blessed songwriter, would definitely have been better off with finally staying retired.
Instead he's once again coming back with another pointless record and even penetrates us with another tour.
But it is just painful to see that old physical wreck crawling on stage and you sincerely hope that his nurse will show up soon and bring him to bed or at least someone would get him a weeled walker. And then you get frightened anytime the bowed old man is breaking safe contact to the microphone stand and tries to overcome the distance to where his glass of wine is standing.
Oh my...
Come on Al! Face it! Time is over!
You should seriously consider moving to a nice and safe nursing home. Sad but true.

And regarding the Relapse album, oh well....
There was some reviewer from the Quietus who summed it up pretty well actually:
"I skipped ahead, listened, shuddered, and skipped ahead again. Rather than waste words, I’ll just say that the remainder of the record is painted in various shades of worse."