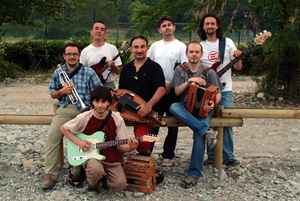 Profile:
Lou Dalfin has been driven by the vision and accomplished multi-instrumentalist Sergio Berardo. Originally founded in 1982, the Lou Dalfin project sought to revitalize Occitanian music: Occitanian culture is found across southern France, into Italy, and also in Spain. Use of the language has long been a source of cultural pride, a statement of identity, and a political act, as 'Occitania' could be considered a country that exists within and across the boundaries of European countries as a cultural presence. The music and language have often been associated with medieval troubadours, and Occitanian music shares some of the ancient qualities of that repertoire.
Sites:
loudalfin.it, MySpace
Members:
Fabrizio Simondi, Sergio Berardo