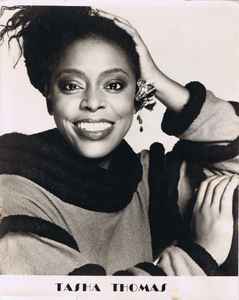 She began her musical career singing backing vocals on Louis Armstrong's legendary album "What A Wonderful World". She went on to sing with numerous artists, including Stevie Wonder, Johnny Winter, Cat Stevens, Jim Croce and in 1976 Slade. She starred in the original mid-1970's Broadway production of "The Wiz" in the role of "Aunty Em". In 1978, on the back of her growing popularity she released her disco single "Shoot Me (With Your Love)" on the independent label Orbit Records (2).
Sites:
answers.com, discomusic.com, Wikipedia
Variations:
Viewing All | Tasha Thomas
Tasha