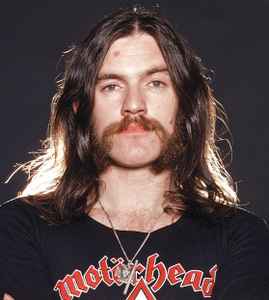 Started his career in the band The Rocking Vickers as a guitarist. Lemmy said later on that he was a terrible guitar player. He did not start to play the bass until he joined the english space rock band Hawkwind. The bass guitar came more naturally (and easier) to him.
He was later fired from the band during a U.S tour because of the use of 'wrong' drugs (Speed). But with Hawkwind, he manage to score a hit with 'Silver Machine' which Lemmy provided the vocals to.
Not long after Hawkwind. He formed his own band 'Bastard'. But after Lemmy was told by his manager that it would never reach The Top Of The Pops with that name. He changed it to Motörhead, named after the last song he had written with Hawkwind.
The idea was simple. Hard, fast, loud and ferocious Rock'n'roll. A formula which found its way to the ears of bikers and punk crowds. He would remain as the sole original member of Mötorhead until his death.

Lemmy Kilmister was known for being true to his legacy towards the band and himself. Up to his death he never changed the sound or direction of the band. His personal lifestyle was strictly rock 'n' roll attitude, including smoking (He would later stop inhaling), alcohol use which included a full bottle of Jack Daniel's daily since he was 30, and excess use of Speed (amphetamine).
After 40 years of service in Motörhead, he was one of the most respected rock musician on the scene.
He was known for his use of Rickenbacker 4004 model bass on stage for the majority of his career, and his towering stance with the microphone raised high at a downwards angle.
Off-stage he was known for his honesty, which was reflected through the countless interviews he did during his career with Motörhead. Behind the rock'n'roll exterior, he was a humble, well spoken of and also a caring, person.
He was also well-read on history, especially with an emphasis on World War II. This led to a hobby as a collector of WWII artifacts. He would later become an officially registered collector for his accumulation over the years. He owned a Hetzer tank hunter.
During his career. He took part in certain historical events such as seeing The Beatles perform at the Cavern Club in Liverpool before they gained world fame.
He was also a roadie for Jimi Hendrix around 1967-68.
He moved to Los Angeles, California in 1990 where he remained until his death.

You will be forever remembered in your music as the god of heavy metal and rock!