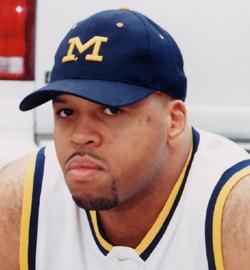 Real Name:
Craig Adams
Profile:
Craig De Sean Adams (born October, 1977), better known by his stage name DJ Assault is an electro musician from Detroit, Michigan. Collecting 12" and 45's since age 7, he would go on to be one of the most recognized DJs and producers of Detroit Dance music.

Together with producer Mr. De' he started Electrofunk Records and Assault Rifle Records and put out a series of 12" singles and mix CDs from 1996 through 1999. The duo then parted ways and Assault would go on to set up his own label Jefferson Ave.
Sites:
Bandcamp, MySpace
Aliases:
Craig Adams (4), Craig Diamonds
Variations:
Viewing All | DJ Assault
Assault, D.J. Assault, DJ Assault a.k.a. Craig Diamonds, DJ Assaults

May 20, 2022
The King Of Booty... Go support this mans Bandcamp page.
https://store.jeffersonave.com/
Reply Notify me Helpful

January 20, 2018
Someone please put out a retrospective of this guy's stuff. Rush hour? Give this man some well deserved cash and give us some new vinyl. Most of his records have been thrashed to hell.
Reply  See 1 reply Notify me 28 Helpful