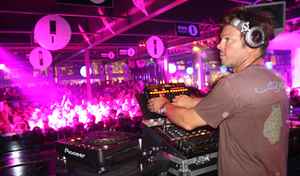 Real Name:
Peter Michael Tong
Profile:
Pete Tong (b. 30th July 1960, Dartford, Kent) is a notable British DJ, electronic dance music producer, and promoter. He's best known as a long-running host of The Essential Mix and Essential Selection shows on BBC Radio 1 and the founder of FFRR label. In 2014, Tong got appointed as MBE (Member of the Most Excellent Order of the British Empire) for his broadcasting and music services.

From 1979 till 1983, Pete Tong worked for Blues & Soul magazine, initially as an advertising sales assistant, but subsequently publishing reviews and contributing to editorial. Tong then became an A&R manager at London Records. Through his work at the label, Peter got his first exposure to the emerging sounds of "house music" imported from overseas. In 1986, he co-organized Various - The House Sound Of Chicago, an iconic LP/CD compilation licensed from D.J. International Records that became one of the first notable releases to present the 'Chicago house' genre to the UK audience.

Pete Tong began his performing career as an amateur disc jokey, initially at local events. He was inspired and significantly influenced in his formative years by DJ Froggy. Tong first appeared on the radio in the late 1970s, originally at local stations, such as Radio Invicta. In 1981, he debuted with a 15-min section covering the dance music industry's latest news on Peter Powell's show at BBC Radio One. He began his Friday evening show, the "Essential Selection," in January 1991.

The artist's name became part of the viral, tongue-in-cheek expression, "it's all gone Pete Tong" (where Pete Tong is rhyming slang for "a bit wrong"). Purportedly originating from Paul Oakenfold's '87 article 'Bermondsey Goes Balearic,' which came out in Boys Own fanzine published by Terry Farley and Pete Heller, it inspired an eponymous 2004 film It's All Gone Pete Tong, a mockumentary about a fictitious DJ who started losing hearing at the career's peak. Pete Tong had a brief cameo in the film and appeared on the soundtrack by Graham Massey.

From 2003 to 2007, Pete Tong was the resident DJ at Pacha Ibiza nightclub in Spain, returning in 2011 with a regular event All Gone Pete Tong. He also started a radio program under the same title in the United States on iHeartRadio's "Evolution."

August 13, 2003
People might say he lacks style, but this is the man to get you dancing. Saw him opening for Chemical Brothers and Oakey at Cow Palace in SF in 2002 and he got my feet moving. Kinda on the dark funky side at first and then he made us explode with Sasha's Remix of Purple, yes that's right! His Essential Mix Release of 2001 is not too bad either by the way.
See 1 reply