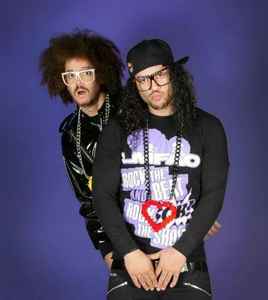 September 29, 2022
I decided to have my say somewhat more than 10 years after the review of "irionman".

Agreed, LMFAO are not the best rappers, the best singers, the best songwriters, the best performers.
But their track "Party Rock Anthem" is one of those rare "modern" tracks that is still around at parties, whether you like it or not.
People are still "shuffling" to it, just as people are still doing crazy moves to Psy's "Gangnam Style".

Of course, the music they name "party rock" was already around for some years. Around 2005, Dutch collective The Partysquad was already exploring the boundaries of hiphop and house, mixing it with bubbling, electro and Arabic sounds. Their track Rampeneren (2006) can be regarded as one of the first "party rock" recordings (the music was named "dirty Dutch" in our country).

September 4, 2012
I'm surprised it took me as long as it did to listen to a song from these guys. I will admit, the music was a bit catchy and I can see how it is popular at clubs. However, my stance on this duo changed after I saw their interviews. After watching these two do a serious interview, it has become obvious that these two are blithering idiots. They believe that their music inspires people to drink, to have sex, and to feel good. Now, the last one there isn't bad. Every musician should want their audience to enjoy themselves. However, saying your music should inspire someone to drink or fuck, now that is just plain stupid. Any moron can make another moron want to drink. Same goes for having sex. The fact that these two said that, and were dead serious about it, tells me that they have no actual skill.

Let's go a bit more in depth shall we? Take a look at their "shuffling" video if you ever get the time.(Or want) They try to say that shuffling is just an extension of your natural walk. (Or stride) Now, I don't really care much about shuffling, but I totally disagree with this statement. People who shuffle, people who are good at it, bring a different side of themselves to their shuffle. It's a full body dance, if you will, and it takes a lot of practice to bring some of the more complex movements. LMFAO's shuffle is garbage. They just bounce around a bit, flail their arms, and shout. Stupid.

On to their lyrics. I understand that modern club music is shit. That's obvious. I just have to go into this for shits and giggles. Every single one of their songs mentions their dicks. They are quite proud of that. Personally, well in my opinion, even for a club song, if all of your songs mention your genitals.......I don't even know the insult I want to use on that one. Actually, screw this, I'm not going to get into their lyrical crap. You all know how bad it is, and it doesn't take a genius to find out if you don't know. Look it up and you'll see my view.

Musical abilities: LMFAO has absolutely no musical talent. They both have horrible singing voices, they both cannot make a legitimate rap single, and they both don't play any instruments. I believe they are an insult to their grandfather, Berry Gordy. I mean, their gramps created Mowtown records. That is extremely huge. While I'm not a fan of the music on that label, or the style of that music, I still respect it because of how talented the musicians were who played on it.

I believe this group only got popular by sheer dumb luck and connections established before their time. You make one somewhat catchy club song, something that can be played for a group, and then you market it to the ignorant masses. Seriously, what else can you do with LMFAO songs? You can't really work out to them, you generally won't be blaring it in your car, you probably won't listen to it while working....you only listen to this type of crap in clubs and at parties. I feel sorry for the clubs who play garbage like this. I believe there are so many other great songs, most of which don't ever see the light of day, that would make excellent party songs. It's a shame that shit like this is popular, and actual talented musicians get shafted.

So, in 4 years, LMFAO has rocketed to stardom. They have hundreds of millions of views, probably have made millions, and they still have no damn clue what they are doing. (Don't believe me? Watch the video about how they got their nicknames) I predict that this group will only last until 2014. Why? Well, I think they got too popular too quick. They will be expected to keep up their popularity by bringing in songs that are just as popular as the old. I don't see this duo doing that. They do not have the brains to do that. They will hit one bad song soon. Something that the public just finds "average". This will probably cause the media to swarm on it, causing the duo to flounder a bit. Under the stress of this sudden mediocrity, I believe the duo will break. They might try to produce another hit after the average song, but I bet that it will fail harder. (And this will continue until no one listens to LMFAO anymore) Final prediction: No one will remember LMFAO in 10 years and in 20 years, the duo will probably be dead due to either an overdose of sorts, or something related to alcohol.

I hate being the "old" guy sometimes, but I don't understand where this type of shit came from. When I was growing up we had the power ballads. We had electro. We had disco. Compare the old club scene to the modern one. I'm a bit curious to see what things will be like in another 20 years. (and a bit nauseous at the idea too)
See 4 replies