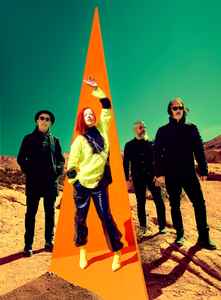 In the early 1980s, rock producers Vig (Nirvana, Smashing Pumpkins) and Marker founded Smart Studios, a recording studio in Madison, Wisconsin. Vig and musician friend Erikson formed the group Fire Town in the late 1980s, an offshoot from their disbanded band Spooner. Marker was their roadie. Vig and Marker began making electronic/rock mixes for artists like Nine Inch Nails and House Of Pain. In 1993 they decided they wanted to form a band that employed the remix and genre-bending approach they experimented with earlier and began looking for a singer and fourth collaborator. Guitarist Steve Marker came across a video of Scottish band Angelfish on MTV's "120 Minutes". Struck by the lead singer's (Shirley Manson) voice, he informed the guys and their manager contacted Manson, inviting her to audition in Madison, Wisconsin. After an unsuccessful audition, Manson asked to audition again, which led to skeletal versions of a few songs. The band officially formed in 1994, and released their self-titled debut in 1995. All four members are involved in songwriting and production.
Sites:
garbage.com, Facebook, instagram.com, garbage.tumblr.com, Twitter, YouTube, YouTube, YouTube, garbage-discography.co.uk, Wikipedia
Aliases:
Angelfish (6), Puff (17)
Members:
Butch Vig, Duke Erikson, Shirley Manson, Steve Marker
Variations:
Viewing All | Garbage
Garbige

Check out Curve if you're a Garbage fan and not familiar with them. They came out before Garbage and I think some suspect Butch Vig was influenced by their sound.

Soon the new album wil come out and i hope they bringout a dvd with new stuf and also the Garbige anaversary tour
30 mei Paradiso Amsterdam ill be there :)

Trivia: 'Only Happy When It Rains', from the album 'Garbage', is featured in 'The X-Files', S6E07, 'Terms of Endearment'.

September 7, 2014
GARBAGE: ONE OF THE BEST U.S. (Real Rock 'n Roll) BANDS to emerge from the 90'S (THOUGH SHIRLEY MANSON, LEAD VOCALIST, HAILS FROM SCOTLAND)!! HAVEN'T ENJOYED A FEMALE ROCK LEAD THIS MUCH SINCE JOAN JETT!!!
Reply Notify me 5 Helpful