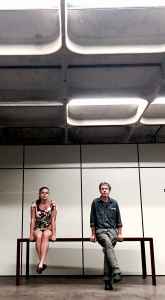 Profile:
Time Was marks a new stage in the evolution of Zomes. The album marks the first recordings of Zomes as a duo and the first time an album was recorded in a studio and not on a cassette deck. It all began when Asa Osborne was performing at the Perspectives Festival in Sweden, where he met Hanna through a mutual friend in the Skull Defekts. During Osborne’s performance, Hanna, a vocalist, ended up improvising along with the music with stunning results. Realizing the complimentary aspects of their musical personalities and their natural musical affinity, Hanna joined Asa on stage for an improvised performance in a Stockholm art gallery several days later. Asa invited Hanna to perform with him again at the Bowery Ballroom in New York City on the last date on his tour with Beach House, beginning the trans-Atlantic exchange of ideas that eventually became Time Was.

Hanna traveled to Baltimore during September and October of 2012 to record Time Was at Tempo House. These are the first Zomes recordings laid to tape in a studio and the songs are as immersive on record as they are live. Time Was is an expansion of the Zomes aesthetic, an open and natural collaboration between like-minded individuals. While there are certainly obvious musical connections to Osborne’s work with Lungfish, the duo of Asa and Hanna have built on this considerable foundation and expanded the form to glorious new heights.
Sites:
zomes.se, Bandcamp
Members:
Asa Osborne, Hanna Olivegren