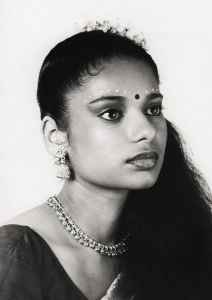 Real Name:
Sheila Savithri Elizabeth Chandra
Profile:
Sheila Chandra is a writer and retired English vocalist and actress of South Indian descent. She now coaches creative professionals and has written two guidebooks for improving organizational skills. She first came to prominence as a teenage actress on the British teen school soap "Grange Hill" playing the character Sudhamani Patel between 1979 and 1981. Around the time she left the series, her future husband and musical partner Steve Coe, head of Indipop, was looking for a vocalist for his Asian fusion band Monsoon, and became enamored with Chandra after allegedly finding one of her demo tapes in a box at Hansa.
Monsoon's debut single, "Ever So Lonely", recorded when Chandra was 16, reached #9 in the UK charts in April 1982, but subsequent singles made less impact and she left the group at the end of the year. She subsequently made 4 solo albums with Indipop, before retiring at the age of 20. She returned to singing in 1991 for a 5th solo album, Roots and Wings, in which she began to experiment with drone-based music. This set the tone for her work in the '90s, including 3 albums for Real World Records, fusing Arab, Andalucian, Celtic and Indian vocal styles with even older traditions such as Gregorian plainsong. She also performed live for 2 years in the '90s.
Since 2009, a neurological condition, called Burning Mouth Syndrome (BMS), has caused Chandra extreme pain when using her voice, so she again retired from singing.
Sites:
sheilachandra.com, Wikipedia
In Groups:
Monsoon
Variations:
Viewing All | Sheila Chandra
Chandra, S Chandra, S. Chandra, S.Chandra, Shelia Chandra, Shiela Chandra

Sheila sure has one of the most sampled female vocals. Think about RMB's "Love is an ocean"? Sheila Chandra. Visions of Shiva's "How much can you take"? Sheila Chandra. Andrew Brix's "Piano Euphoria"? Sheila Chandra.
She was even asked to perform the vocal on The Prodigy's "Smack my bitch up", but refused when realised the vulgarity of the track itself.
She's the One!