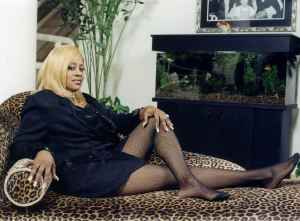 Real Name:
Valaria Marie Young
Profile:
Val Young (or Lady V as she is sometimes known as) was rumored to have been discovered in the late 1970's by George Clinton when he (allegedly) incorporated her into the Brides Of Funkenstein, one of the many acts in his Funkadelic stable.
These facts, however, are currently under discussion on the basis of contradictory information being brought to light by ex-Funkadelic vocalist Dawn Silva.
Val joined The Gap Band, where she was featured on the funk classic "Oops Upside Your Head". In the same period, she also recorded with Roy Ayers as a background vocalist. Eventually, after five albums with gap band, she attracted the attention of black music trailblazer Rick James. Impressed as much by her striking physical appearance as by her musical talents, James promoted her as the "Black Marilyn Monroe".
He also produced her 1985 hit album "Seduction", which contained two top 30 R & B hits.
"If You Should Ever Be Lonely" was a successful single in 1986, before Val left James's umbrella to start a solo career at Amherst Records.
At Amherst, she released a 12" single entitled "Private Conversations" in 1987.
Val has adopted a low profile since that release, recording background vocals, sporadically, for various rap acts including Warren G, Nate Dogg, Too Short and 2Pac.
Val recently joined a reformed Mary Jane Girls, taking the place of lead singer Joanne McDuffie.
Sites:
Wikipedia, allmusic.com, MySpace
Aliases:
Lady "V"
In Groups:
Brides Of Funkenstein, East Coast Family, Mary Jane Girls, The Gap Band
Variations:
Viewing All | Val Young
Lady "V", V. Wilson, V. Y. Andrews, V. Young, V.Young, Val, Val "Lady V" Young, Val Young Andrews, Valerie Young, Young