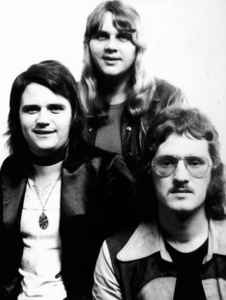 Profile:
Triumvirat was a progressive rock band formed in 1969 in Cologne, Germany by keyboardist Hans-Jürgen Fritz, bassist Werner "Dick" Frangenberg, and drummer/lyricist Hans Bathelt. Frangenberg left in 1970 and was replaced by Hans Pape. They were signed by EMI Records and recorded the album, "Mediterranean Tales (Across The Waters)", released in 1972 on Harvest/EMI. During the making of the second album, "Illusions On A Double Dimple" (1974), Pape left and was replaced by Helmut Köllen. EMI sent a copy to Capitol Records who released the album in the U.S, where it received significant airplay. A U.S. tour followed with Triumvirat opening for Fleetwood Mac. The next album, "Spartacus" (1975), gave Triumvirat their greatest chart success.

At the end of the U.S. tour of "Spartacus" Köllen left to pursue a solo career. Dick Frangenberg rejoined on bass and Barry Palmer was the new lead vocalist. This quartet recorded "Old Loves Die Hard" (1976), which was far less successful than it's predecessors. There was no supporting tour and Triumvirat broke up. In 1976 Fritz and Köllen were working together again on a new Triumvirat album: "Pompeii" (1977). Köllen felt some of the material was outside his vocal range and Palmer was invited to rejoin the group. Köllen's death in February, 1977 left Palmer with all the vocal duties. Bassist Dieter Petereit and drummer Curt Cress rounded out the band which was briefly renamed "New Triumvirat" due to a legal dispute between Fritz and Bathelt.