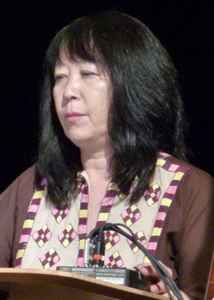 Real Name:
森 郁恵
Profile:
Drummer, electronic percussionist, composer and graphic designer, born 17 December 1953 in Tokyo, Japan.
Ikue Mori was born and raised in Japan, graduating from Takabi Art School. She says she had little interest in music before hearing punk rock. In 1977, she went to New York City, initially for a visit, but she fell into the music scene, and has remained in New York since.
Her first musical experience was as the drummer for seminal no wave band DNA, which also featured East Village hero Arto Lindsay. Though she had little prior musical experience (and had never played drums), Mori quickly developed a distinctive style.
After DNA disbanded, Mori became active in the New York experimental music scene. She abandoned her drum set, and began playing drum machines, which she sometimes modified to play various samples. According to Mori, she was trying to make the drum machines "sound broken." In recent years she has used a laptop as her primary instrument, but is still sometimes credited with "electronic percussion".
In 1995, she began collaborating with Japanese bass guitarist Kato Hideki (from Ground Zero), and together with experimental guitarist Fred Frith (from Henry Cow), they formed Death Ambient.
Beyond her solo recordings, she has recorded or performed with Dave Douglas, Butch Morris, Kim Gordon, Thurston Moore, and many others, including a trio with John Zorn and singer Mike Patton as Hemophiliac, as well as being a member of Zorn's Electric Masada. With Zeena Parkins, she records and tours as duo project Phantom Orchard. She often records on Tzadik, as well as designing the covers for many of their albums.

Mori has drawn inspiration from visual arts. Her 2000 release, One Hundred Aspects of the Moon was inspired by famed Japanese artist Yoshitoshi. Her 2005 recording, Myrninerest, is inspired by outsider artist Madge Gill.