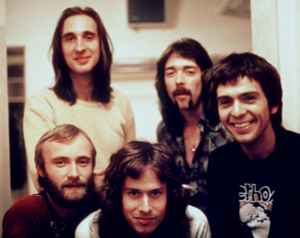 Profile:
Formed at Charterhouse School, Godalming, Surrey, South East England, UK in 1967, Genesis are among the top 30 highest-selling recording artists of all time.

Their early work is characterized by complex song structures, elaborate instrumentation and the theatrical antics of founder member and vocalist Peter Gabriel, who left the band August 15, 1975. Unable to find a suitable replacement, it was drummer Phil Collins who assumed lead vocal duties. This change, as well as the departure of guitarist Steve Hackett, two years later, saw the remaining three members (Phil Collins, keyboardist Tony Banks and bassist/guitarist Mike Rutherford) move into more accessible pop-based music. This change in style resulted in a huge growth in Genesis' popularity throughout the 1980s and early 1990s.

In 1996 Phil Collins left to concentrate on his solo work and other projects, leaving erstwhile bandmates Mike Rutherford and Tony Banks to forge ahead with new recruit; Stiltskin vocalist Ray Wilson. This line-up lasted for one album only (1997's Calling All Stations) and Genesis soon found itself on hiatus after the poor performance and critical reaction of the new album.

In 2006 – after years of speculation – Phil Collins, Tony Banks and Mike Rutherford reformed Genesis for the successful Turn It On Again tour. A reunion involving ex-members Peter Gabriel and Steve Hackett remains much talked-about and unrealised.

January 7, 2022
I recently rediscovered Genesis after a 25 year absence in my life. Can anyone point me to some good love shows? I just picked a up Toronto 1974 and Rainbow Theater 1973. Any other ones I need to own?
Reply  See 3 replies Notify me Helpful

May 26, 2021
Genesis did something amazing... they created incredible Prog-rock masterpieces and remained relevant when the musical landscapes of the late 70's and 80's changed. As a teen in the 80's, but with a preference to their 1970-1980 material, I still appreciated hearing the band -- and all the fantastic solo projects -- during the era of Duran Duran, Tina Turner, Prince, Culture Club, etc. Yeah, Phil Collins was "everywhere" - but so many artists wanted to work with him. He simply said yes. Yes, to working with Eric Clapton, Robert Plant, Peter Gabriel, Howard Jones, ... Wish his impressive talent didn't make so many haters out there, but I guess that's the "Way of the World." That being said, I still prefer The Lamb Lies Down on Broadway and Seconds Out (live), but I have no hatred toward their major chart-success years; not for the band, nor Phil, Mike Rutherford, or Peter Gabriel. (And at least they never tried to be disco, reggae, punk, or did an album cover with their shirts unbuttoned on a beach!)
If you're a Genesis fan with mostly positive things to say, then come join the Facebook group : Genesis 50+ Years
Reply Notify me 4 Helpful

April 28, 2021
I'm wondering whatever happened to the live version of "Supper's Ready" that was left off of the first Genesis live album due to time constraints. Was it really lost or destroyed, or does it still exist somewhere? I'd like to see it added to a CD re-issue of the live album sometime in the future!
Reply  See 5 replies Notify me Helpful

December 3, 2020
Just wondering how "Wind And Wuthering" (1976) is showing before "Trick of The Tail" (1975) on this main Genesis list even when it is arranged in date order? is it a glitch, or is there a stray date buried somewhere?
Reply  See 3 replies Notify me Helpful

January 9, 2020
100% Agree.. a masterpiece which rather brought Gabriels time with the band to a fitting conclusion
Reply Notify me 1 Helpful

November 19, 2019
The best Genesis album BY A COUNTRY MILE is obviously “The Lamb Lies Down On Broadway”. All of their previous albums were leading inexorably to that creative peak. It’s not only their best album, it’s one of the greatest recordings of the classic rock era. I feel fortunate to have been in my teens and a confirmed Genesis fan when it was released, and so bought one of the first pressings the day it came out, which I still have. Music like this will never get old.
Reply  See 3 replies Notify me 2 Helpful

October 28, 2019
My notes for Genesis albums from 1980 to 2007 (Personal opinion, surely everyone will have their own particular notes for each album).

October 28, 2019
My notes for Genesis albums from 1969 to 1978 (Personal opinion, surely everyone will have their own particular notes for each album).

Don't confuse mixing with MASTERING. If the 2007 mixes sound "squashed", that is down to the mastering. Having said that, the original mixes should never have been replaced by the Nick Davis remixes.