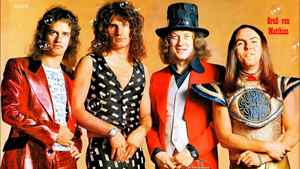 Slade rose to prominence during the glam rock era of the early 1970s. With seventeen consecutive Top 20 hits and six number ones, the British Hit Singles & Albums names them as the most successful British group of the 1970s. They were the first act to have three singles enter at #1, and all six of the Wolverhampton band's chart-toppers were penned by Noddy Holder and Jim Lea. Total UK sales stand at 6,520,171, and their best selling single, "Merry Xmas Everybody", has sold in excess of one million copies.

The Illustrated Encyclopedia of Music has also made mention of Holder's powerful vocals and guitarist Dave Hill's equally arresting dress sense along with the deliberate misspelling of their song titles for which they became well known.

The group started off as The N' Betweens, as which they recorded two singles and built up a reputation on the nationwide touring circuit. They were reluctantly renamed Ambrose Slade to satisfy the terms of their new record deal with Fontana Records. They released one commercially unsuccessful LP under the Ambrose Slade name, before coming under the management of Chas Chandler who shortened the name to Slade.

While Slade's attempts at cracking the United States market were largely unsuccessful, they left their mark on several US bands who cite Slade as an influence. Kiss bassist Gene Simmons admitted that his band's early songwriting ethos and stage performance style was influenced by Slade. In his book, Kiss and Make-Up, Simmons wrote on page 85, "the one we kept returning to was Slade," and "we liked the way they connected with the crowd, and the way they wrote anthems... we wanted that same energy, that same irresistible simplicity. but we wanted it American-style". Tom Petersson of Cheap Trick said on their From Tokyo to You DVD that his band went to see Slade perform, and that they used "every cheap trick in the book", thus inadvertently coining his group's name. Cheap Trick covered the song "When the Lights are Out" (the original appeared on Old New Borrowed and Blue) on their 2009 release, The Latest. Quiet Riot had US hits with their covers of "Cum On Feel the Noize" and "Mama Weer All Crazee Now". The origins of Slade's influence on Quiet Riot dated back to the early 1970s, when Kevin Dubrow photographed Slade during their first Los Angeles appearances at the Whisky a Go Go.

(THE HARD & HEAVY MUSIC HALL OF FAME) by crimsonmetal74
Some Of My Favourites by piharrod
Favourite artists by Ackaraga
“The Encyclopedia Of Heavy Metal” by crimsonmetal74
Hard Rock (Classical) by BassLobster
Artists i saw LIVE by mauri.kainulainen
Top 120 Favourite Live Acts of All Time by BAHAMABOY
Bands Iv'e Seen LIve by Bladerunner1858
Artists I have seen live by JACOBSAJC
基本リスト用のアーティスト一覧 by 3313project
基本リスト用のアーティスト一覧 by arapstock
Bands that shortened their names by RockerFrank
My Favorite Artists by crimsonmetal74
Artists for the Future by Milesbeet-hoven1
Favorite Artist by Szanley18
Need to be in RNRHOF by robtadrian
Bands I have seen Live by 2112adrian
Top 40 Favourite Glam Rock Artists of the 70s by BAHAMABOY
BEST GROUPS by poneromusikologist
Artists in My LP Collection by sillypenta
All-Time Seen List by toinor
Favorite Artists by LeDiskosaur
Legend & Heroes by nowhiteline
Favorite Artists by javiercrasher
View More Lists →