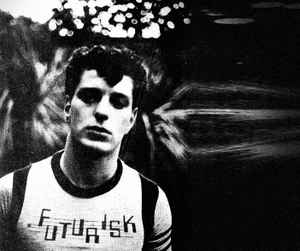 Real Name:
Jeremy Kolosine
Profile:
FUTURISK was a pioneering electro-punk group that recorded and performed in the pre-midi era of the early '80's. They had two vinyl releases that sold out, a legendary live show and some videos, but for a number of reasons by 1984 Futurisk was history. Eventually the main core of Futurisk would be the Kolosine/Hess/Howard line up, but in '79 when a teenage Jeremy Kolosine won studio time & money in a competition with his drum-machine triggered guitar-synth act called 'Clark Humphrey & Futurisk', he decided to form a band around the name to record a more punk release "The Sound of Futurism 1980/Army Now". It was an ambivalent anti-war anthem, with Jack Howard on drums, Frank Lardino on synth and Kolosine on vocals and guitar synth. In '81, Kolosine, who had gotten absorbed in a new synth/sequencer replaced Lardino with synthesist/recordist Richard Hess who had a myriad collection of Moogs, Oberheims and CATs,etc. and the line up for the "Player Piano EP" was cast. The EP, like the live show, was a strange blend of punk/minimalist/disco influenced electro pop, with drum-machine triggered synths and often frantic real drums all led by Kolosine's schizophrenic Bowie/Ferry/Foxx adulations (and about 20 seconds of punk-funk guitar). It was recorded by Rich and the band in the rooms of Ron K's house.The drum sound, gotten in a bathroom, rocks, even today. Reportedly, Futurisk may have been the 1st synth-punk band in the American South...or something, and 1981's track 'Push Me Pull You (pt. 2)' was an early pre-'Rockit' excursion into electro-funk. In 2003 LCD Soundsystem's James Murphy gave a complimentary wink to Futurisk by using the track on the delightful Colette # 5 DFA Comp CD. In 2007 an unreleased 1982 version of the track "Meteoright" was included on the "Found Tapes" compilation vinyl LP, and in 2010 a 30th Anniversary 12-inch vinyl release of "Player Piano" came out on Minimal Wave Records and included unreleased tracks.
In 2011, Futurisk's "Lonely Streets Remixes" was released on Minimal Wave / Cititrax Records with remixed tracks by Chris Carter (Throbbing Gristle,Chris & Cosey), Tom Furse (The Horrors), Prince Language (DFA, Editions Disco) and Complexxion from the UK.
Sites:
futurisk.net, Facebook, Twitter, Bandcamp, SoundCloud, YouTube, plus.google.com, MySpace, Last.fm, realclarkhumphrey.tumblr.com, minimalwave.futurisk.net, Wikipedia
Members:
Jack Howard (2), Jeremy Kolosine, Richard Hess