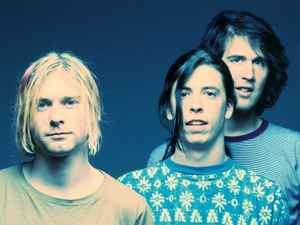 July 29, 2022
This is total shenanigans! Didn't know Kurt spent that much time away from the needle to make that many albums...

May 20, 2022
page needs serious cleaning, why are demos and promos under albums?

May 6, 2022
Jeez! This band is WAYYY too underground for me. I wonder if they will ever make it big someday...

April 27, 2022
Bleach, Nevermind, In Utero, Unlpugged should be under albums. Everything else should be under singles and EPs, compilations and then miscellaneous. Under albums at the moment it just looks like a dog’s breakfast.

December 14, 2021
Nirvana is amazing! I for one prefer the album "Bleach". The 20th anniversary has kind of a mixed sound. Kurts voice is the loudest and the drums and the bass sound kind of fused together.

October 6, 2021
someone needs to clean this up. what a mess. so many wierd "releases"

September 13, 2020
To be clear on how this problem works: if a release isn't marked as an album, ep, or single it gets put into misc if the run-time is short enough to be an EP. If it's long enough to be an album discogs AUTOMATICALLY puts it in the album section. It's not other users doing it.
What I think discogs should do to fix this is add a "live" tag in the same section as album and EP. Yeah sure almost every band has 1 "essential" live album and it would get moved as well, but it's a small price to pay. I don't mind "From The Muddy Banks" getting moved to just before misc, or Kiss' "Alive", or Slayer's "Decade Of Agression". It's a small price to pay. Did you know Metallica's section is 20 pages long despite only having 10 albums and 2 cover tunes albums? Every concert from a certain year onwards has been released as a "buy it on your way out of the theater" type release (Pearl Jam does this too).

July 25, 2020
I don't know why some people must do this... what problem they have ? They're not fan or lovers of music, this is not Facebook or some stupid social network.... I think that DiscoGS should avoid this and send them away from DiscoGS