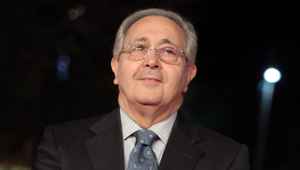 Profile:
Stelvio Cipriani (also knowns as Viostel, a play with Stel-Vio) born 20 August 1937 in Rome, Italy, was an Italian composer, most notable for his genre movie soundtracks. Though not coming from a musical background, as a child Cipriani was fascinated by his church's organ. His priest gave him his first music lessons and encouraged Cipriani and his family. Cipriani studied at Santa Cecilia Conservatory in Rome from the age of 14, then played with cruise ship bands, enabling him to meet Dave Brubeck. Upon his return to Italy, he accompanied Rita Pavone on piano. His first soundtrack was for the Spanish/Italian spaghetti western El precio de un hombre: The Bounty Killer, starring Tomas Milian, in 1966. It was followed by a well known score for Un uomo, uno caballo, una pistola / The Stranger Returns / Shoot First Laugh Last (1967), starring Tony Anthony.