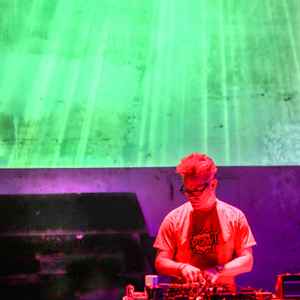 Profile:
Janek Schaefer was born in middle England to Polish and Canadian parents in 1970. After preparing sound collages as a boy, Janek's musical career was fractured in his teens when, as head chorister at school, his voice broke. A decade later, while studying architecture at the Royal College of Art, the fragmented noises of a sound activated tape recorder travelling overnight through the British postal system were to re-establish his audio career. That work, titled 'Recorded Delivery,' was made for an exhibition with one time postman Brian Eno. Since then the nature of sound has been his primary area of exploration, resulting in many releases, installations and soundtracks for exhibitions, and most notably performances involving his self built/invented 'Twin' and 'Tri-phonic' turntable (which is listed in the Guinness Book of Records as the 'World's Most Versatile Record Player').

Using hybrid analogue and digital techniques to manipulate field recordings with live modified vinyl and found sound in a 'Concrete ruffian style' (The Wire, 1998), his most recent work has been examining the role of vinyl as a compositional tool with the 'Skate' LP/installation 'Wow' 7" and the 'On/Off LP'. He formed 'Comae', the improvisational electro-acoustic duo with Robert Hampson in 1999, with new collaborations due for release soon with Philip Jeck, Rothko, and Gino Zardo (a New York based photographer).