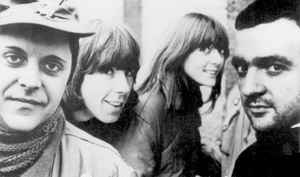 Their first performances were in 1976 and their last gig was in San Francisco in 1981 (recorded and released as "Mission Of Dead Souls"),

Throbbing Gristle officially began at September 3, 1975 and they officially split on June 23, 1981. After they split, Genesis and Peter formed Psychic TV (and Peter later joining Coil) and Chris and Cosey becoming, well, Chris & Cosey. They came back together 23 years later in 2004 to plan an ill-fated weekend festival, which became a one-off recording session in London when the festival fell through, releasing a limited TGNOW album of the recordings.

A series of new releases and remasters followed as well as live performances. In 2010, Genesis withdrew from touring with TG and the three other members renamed themselves X-TG. However, Peter's death in November that year brought an end to TG/XTG for good. One final release, released under the name X-TG, followed in 2012.

July 11, 2022
I always wanted to know which albums are the best of TG, because I don't have all of them and I only have
DOA
20 Jazz Funk greats
and Heathen Earth
Which other do you recommend?
See 2 replies

October 12, 2021
Bought this as an innocent 15 year old when it first came out. Played the heck out of it but couldn't get my mates of the time into it (same story with Cab Volt, Pere Ubu, Robert Rental etc.) But... one day my dear long dead mother walked in whilst I was playing AB/7A at full volume on my tinny hifi. Strangely instead of chewing me out she stood there until the end of the song and then asked me to record it onto her (only) mix tape she played in her car - her driving music - mostly ABBA and Simon and Garfunkel. So I did....
Not sure if she'd be so keen on Blood on the Floor or Hamburger lady but I pride myself of introducing a mid 40's suburban housewife from North Somerset to something as deviant and out there as TG. Just for context, about three months earlier she destroyed my 7" of God Save The Queen in front of me, saying it was disrespectful and, in her words, "Evil". If only she knew.... 😆🤣😂😹

July 23, 2021
Bought 2nd Annual Report and DOA back in the 70s. I liked them but more or less filed them after a while and didn't really go back to them. Liked Psychic TV ok and saw them a couple of times, once at the Hacienda with Wm Burroughs.

Interviewed Genesis once. I wish I could remember something about it but memory has been wiped. He came in with a woman, not sure who. The only thing I recall - at one point he had his hand up her skirt. Possibly to freak me out, I'm not sure. It didn't really. I wish I still had the tape. He lived in Brighton so it wasn't far for him to come in to the radio station.

Recently I saw a lot of the reissue double CDs in a second hand shop in town so I bought them all. They really hit home. We often play them at home and I enjoy them a lot more than I used to. I think they sound better than ever. Timeless. The live CDs are great.

I wish I had that box with all the cassettes. Too late for that. Not enough time left to listen to 26 cassettes.

January 31, 2021
I wish someone would reissue their 3 original albums (Second Annual Report, DOA and 20 Jazz Greats) on cassette. Their "music" really fits that format, I think.

February 15, 2018
Any word on the next lot of reissues? It's well past the late Jan release date.
See 5 replies

November 22, 2017
...yeah, it's surprising the Celluloid bootlegs of 2nd Annual Report & DoA are not banned from sale - they were responsible for Gen going off his nut in a Virgin Megastore & destroying the lot, back in the 70s! These were blatant rip-offs of official LPs made purely for profit by a major company whereas The Kill was (I believe) done by a fan, in a very limited edition, as a tribute.

I see some unofficial TG releases are banned here while others can be traded. I wonder how discogs determined this. I can understand banning newer bootlegs from the past few years but bootlegs that are decades old are musical artifacts especially for a band like TG. Something like The Kill live at Scala is a 30 year old bootleg that they made like 300 copies of. I really doubt that TG members object.