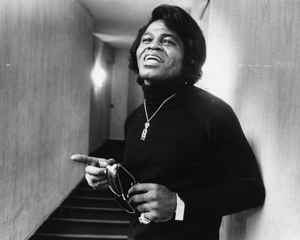 James Brown was raised in poverty in Augusta, Georgia.

1950s: Joined the Gospel Starlighters in 1953, a vocal quartet led by Bobby Byrd, after completing a four-year stint in prison for robbery. As Brown became the focal point of the act, the group changed its name to 'The Famous Flames' and its focus from gospel to R&B. In 1955 The Famous Flames record "Please Please Please" at the studio of WIBB in Macon, Georgia. In 1958 James Brown's first #1 hit, "Try Me", is released. It was the best-selling R&B single of 1958, and the first of 17 chart-topping R&B singles by Brown over the next two decades.

1965: Records "Papa's Got a Brand New Bag", a revolutionary single that ushers in a whole new era of soul music. Released that summer, it tops the R&B chart for eight weeks and even cracks the pop Top Ten.

1971: Signs with Polydor Records, for which he recorded extensively throughout the decade.
1974: The Payback, the most successful of James Brown's Seventies albums—many of which were double-LPs with lengthy, extended tracks—makes its debut on Billboard's album chart. It is the only gold-certified (500,000 copies sold) album of his career.

I just hope everyone who is not an avid listerner of James Brown and crew truly and finally understands what he and is what his crew have done! The Jaybeezzzzzzzzzzz... The soul of James will never die. Spread the word/gospel. Because The Jb's are today still 1000% on the street! Peace ;)

May The Godfather of Soul Live On! I'll be Spinnin' the greatest tunes by him all the time!

February 18, 2015
James Brown the greatest of all time wow a superb legend gone but truly not forgotten tha man set so many boundaries when it comes to music he put the f in funk super funk brother I remember him on soul train wow he can move he just to smooth I love you godfather thank you for the jobs and the music

November 16, 2013
Amazing Brotha that will never ever be 4gotting! RIP James Brown!

He was just too good. He putted 99.9% of virtually all music to shame, because he was a pioneer, and totally original. He created Funk all the way back in the mid-60's and his dancing was unbelievable, only to be copied by people like Michael Jackson and the Rolling Stones. He is also the #1 most sampled artist of all time, and virtually every genre (especially Golden Age Hip-Hop) has incorporated him in some way or another.

One of my regrets is not seeing this guy live. He would have been incredible but still, there is always Live at the Apollo or Revelation of the Mind out there, or some DVD if you want to see what he was like.

A giant has fallen. At 25th December 2006, James Brown took his last three long breaths and went away. As i write this, it is still unbelievable for me to think that this legend is no longer with us, given the fact how energic he still was at age 73. He gave his last performances all the way to the end, and he was suppose to play at B.B King's Nightclub in New York the following week.
You can not tell what the music industry would be sounding like without his presence and effort. He influenced thousands of other producers and music enthustiast around the world and artist from the end of 60's to present has been trying to copy him, immitate him and offcourse, many has sample his music.
To me, the Godfather of Soul has given me all, if not everything to gain my love of music even higher, and appreciate the right music alot more.
But i can't really say much more that has been allready said about a man that has lived a fantastic life. To dive in to his extensive musical output has been a marveling memorial experience and i will collect his music as far as i can.
I advise people to give 'Mr.Dynamite' a last word and honor, because one of the greatest and ifluential artist of the time has left us and to be honest, the world for me does not quite feel the same without him.
I give Brown my upmost respect. Rest in peace and thanks for everything.