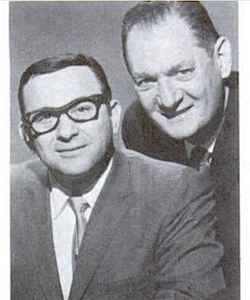 Profile:
Sid Tepper and Roy C. Bennett met as young boys growing up in Brooklyn, New York. Their mutual interest in music led to a highly successful music collaboration that spanned more than twenty-five years. Between 1945 and 1970 they had close to three hundred musical compositions published.

Tepper and Bennett began their career together in 1946, when they became staff song writers for Sydney Mills (of Mills Music). Their first big hit came in 1948 with 'Red Roses for a Blue Lady'. Bennett and Tepper scored big again in 1951 when Rosemary Clooney recorded their composition "Suzy Snowflake." In 1955, their 1954 composition of "Naughty Lady of Shady Lane" was a top-10 hit for both Dean Martin and the Ames Brothers.

After three years with Mills Music, the duo decided to become freelance artists, and their successes eventually caught the attention of Elvis Presley's people. Tepper & Bennett wrote 45 compositions for Elvis' albums and movies, and is quite possibly their greatest legacy to the world of music. In 2002, Roy Bennett and Sid Tepper were honored at ceremonies in Memphis, TN by Lisa Marie Presley for their contribution to her father's success. They were also honored for having written a large portion of the album Blue Hawaii, which is widely considered by Elvis fans to be his best album.