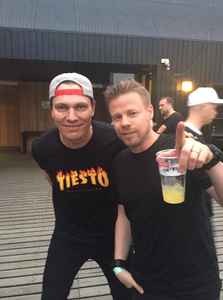 Profile:
Electronic dance music project, created by Ferry Corsten and Tijs Verwest (a.k.a. DJ Tiësto). Under the name "Vimana" Corsten and Verwest produced only two tracks, "We Came" and "Dreamtime". In 1999 the vinyl release came out on Tiësto’s ‘Black Hole Recordings’ label (Cat.nr. BLH 108-5) with ‘We Came’ on the A side and ‘Dreamtime’ on the B side.

In March 2002 the US based label ‘4 Play Records Inc.’ re-released the track on CD with remixes done by Graham Gold, Dace Audé, JOY and Dave Dresden (from Gabriel & Dresden). This time the track was not released as ‘Vimana’, but ‘DJ Tiësto & Ferry Corsten’ appeared on the CD as the artists.