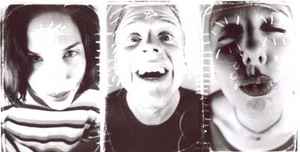 Profile:
Back in 1993, bassist Kristen Thiele met drummer Laura Masura at a nightclub and the two started playing in a spare room in Laura's apartment. A couple of months later they hooked up with guitarist Josiah Mazzaschi who came in to eat at the restaurant Kristen was waitressing at. Soon after, the trio was practicing in a basement in the burgeoning Wicker Park section of Chicago, & MotorHome was on its way. Although barely out of school, MotorHome have culled a sizable loyal following in their hometown. Laura, Kristen & Josiah each bring a different musical element to the band, with Kristen leaning towards a strong sense of melody & sweet sounding vocals. Josiah, whom the Chicago Sun-Times recently called " one of the most creative guitarists in town", prefers heavier guitar sounds and intricate rhythm changes. He often has a small group of sound fiends standing at his feet at shows to see how he creates his noises. Laura, as well, frequently grabs audience members attention with her flamboyant, heavy-hitting drum style. Together, they create a dynamic, distorted pop sound with a distinctiveness all their own.

Motorhome released their debut single on dirt in the fall of '94, featuring " Whole In My Head" / " SugarLow". Bringing the band the attention of several rock critics in Chicago, the single was also voted one of the best 7"'s of the year by Chicago NewCity writer Ben Kim, which helped to quickly sell out the initial pressing. Favorable reviews also poured in through both word of mouth and in print about their energetic live shows. "Creative sonic distortions with an irresistible, subversive pop sound" is how one writer aptly described MotorHome's sound. The band's much anticipated debut CD, entitled "Sex Vehicle," came out in 1995. Recorded with Dave Trumfio at Kingsize Studios in Chicago, the record featured a whopping 21 tracks. "Sex Vehicle" is a sonic kaleidoscope that ranges from heavy hitting guitar-drenched songs to instantly catchy, hook-filled, dreamy pop tunes. It also included a few four track gems that the band have culled from songs they have recorded at their home studio, including a few songs that utilize a cool sounding hand-made microphone crafted by Josiah. The scope of the album reflects the diversity of MotorHome's music, as well as the distinctive styles that each of its members brings to the band.
Members:
Bill Talsma, Josiah Mazzaschi, Kristen Thiele, Laura Ann Masura
Variations:
Viewing All | Motorhome
Motor Home