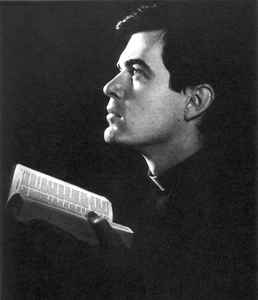 Profile:
Experimental/industrial project from the USA. NON was originally a duo of Boyd Rice and Robert Turman, formed in 1978. Robert Turman left later in 1979, and since that NON became a solo project of Boyd Rice.

Boyd began his exploration of noise in the mid '70s with the aid of a tape recorder and various loops of girl groups, turning pop into a continuous drone. This first collection, known as "The Black Album" was made toward the end of 1975 self-released in 1977 and later re-released as "Boyd Rice" by Mute in 1981. Boyd met Daniel Miller (head of Mute Records) at his first gig in the UK, where he played alongside with Throbbing Gristle, and was among the first artists to be signed on Mute. He is also known for his 7" with treated noise loop grooves, which can be played at every speed and also off-center with extra drilled holes. The first of them, "Knife Ladder", was also his first release as NON. Boyd Rice also releases records with his own name and as Boyd Rice And Friends (with different guests), he does spoken words under the moniker The Boyd Rice Experience and a cover band of 60s' pop songs with the name Spell (with Rose McDowall). Various appearances on works of Blood Axis, Current 93, Death In June and others.
Sites:
mutesong.com, boydrice.com, Facebook
Members:
Boyd Rice, Robert Turman

January 7, 2018
Boyd has been label by lots of people as an extremist, a Nazi, a Satanist, a gentleman, and an artist. I wouldn't be surprised if that might have something to do with it. Death in June has also suffered this fate in America. America, the land of free speech and the land of poor taste. None the less, He is a fascinating individual with an impressive output of music. Highly recommended for the adventurous listener.

October 19, 2017
The answer is simply no. Even the staff at Discogs seems not to know, as many versions that are almost the same are not blocked. No ones able to explain so i thought i help them a bit out of their inconsequency and reported the other versions of that already blocked items too.
When i can't stand anything, then it is such behaviour of inconsequency, lack of consistency together with that attitude of having no clue why they're blocking them (because, when they had, all had been blocked).

October 16, 2017
Does anyone know why Discogs banned so many official NON releases?