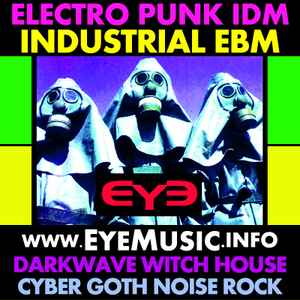 EYE established and is signed to "Blatant Propaganda" an independent alternative music record label - listed on discogs at Blatant Propaganda. Through this label EYE's members have produced, released and promoted numerous compilation albums that collectively feature scores of other underground musicians and producers.

During the 1990s and early 2000s EYE's albums, EPs and singles were released on cassette-tapes and then CDRs and CDs via independent record stores in Australia and mail-order indie music labels in the UK, Europe, North and South America. EYE's first demo cassette-tapes were distributed in 1992. During the 2010s old releases have gradually become available on Bandcamp and other digital music channels. Plans are in place to re-produce some old tracks for re-release during the late 2010s and early 2020s; along with new material.

EYE's personnel have also formed, performed and/or released music under the titles of Aya (2), E.L.F., XELF, DJ Citizen and Robot Citizen; amongst other music acts such as "Clanberra"/"Stoat" that appeared live at the large "Big Day Out" music festival in Sydney during the mid 1990s.

Several of EYE's songs and that of the side-projects have been featured on the playlists of the largest national radio network in Australia - Triple J (JJJ) - as well as nationally via the community radio network satellite (ComRadSat).

Interviews with EYE personnel have featured in: mainstream media publications such as the Sydney Morning Herald and The Canberra Times (newspapers); in popular music press papers such as "DRUM Media" and "3D World" (Sydney); in political newspapers such as "The Green Left Weekly"; in numerous underground 'zines in Australia, Europe, North and South America; and on scores of radio stations in Australia.