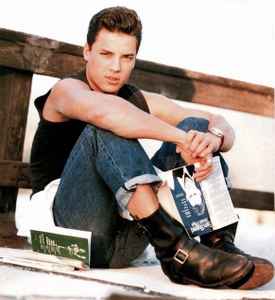 Real Name:
Ivor Neville Kamen
Profile:
English male model, songwriter and singer (15 April 1962, Harlow, Essex, England – 4 May 2021, Notting Hill, London, England).
Kamen died at his London home on 5 May 2021 aged 59, following a long battle with bone marrow cancer, after had been receiving treatment at Hammersmith Hospital, West London.
After his death, Madonna paid tribute, writing, "You were always such a kind, sweet human and you suffered too much".
Later in May 2021, Kamen's brother, musician Chester Kamen, released the track "Stories" performed by his band The Twins: "Dedicated to the memory of my two beloved little brothers, Nick and Barry".
He started as a model and is best known as the guy from the 1985 Levi's "launderette" commercial, and he was the brother of session guitarist Chester Kamen and artist Barry Kamen.
Kamen's musical success was mainly in Europe, and his first single was the 1986 UK Number 5 hit "Each Time You Break My Heart” from his eponymous début album.
The song was written and produced by Madonna and frequent Madonna collaborator, Stephen Bray, with Madonna also singing background vocals. (Her original demo remains one of many unreleased Madonna songs by the artist herself).
Kamen also had a Number 16 follow-up in the UK with his second single, "Loving You Is Sweeter Than Ever" (a cover of the Four Tops' 1966 hit), although his later singles were less commercially successful in the UK but more so in the rest of Europe, particularly Italy, France, Germany, and Spain.
His second album Us (1988) was produced by another Madonna frequent collaborator, Patrick Leonard., and Madonna again made an appearance with background vocals on the song "Tell Me", this time without contributing to the songwriting or production. (although there are several demos with her singing the track before giving it to Nick)
The song became a massive hit in Italy in the summer of 1988, spending a total of nine weeks at Number 1. Later in 1988 a WEA Italiana compilation Loving You, containing mainly extended versions of previous singles, reached number 7 on the Italian album charts. In 1989, Kamen performed the song "Turn It Up" on the soundtrack to Walt Disney's film, Honey, I Shrunk the Kids.
Kamen's third album Move Until We Fly was released in 1990 and contained another big European hit, the single "I Promised Myself", the song reached the top ten in several European countries and was the fourth most played record in Europe in 1990.
In 1992, Kamen released his final album, titled Whatever, Whenever.
Cherry Red Records released his debut album as a two-disc deluxe edition in 2015, followed by the six CD box set The Complete Collection in 2020.
Sites:
Wikipedia, MySpace, nickkamen.com, imdb.com
In Groups:
Ferry Aid
Variations:
Viewing All | Nick Kamen
Kamen, Kamen, Nick, N. Kamen, N.Kamen, Nick, Nick Camen, Nik Kamen, Nivk Kamen