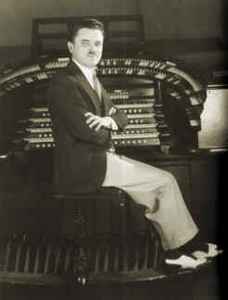 He was well-known in the 1920s as a theater organist for silent films and was a very popular gramophone record recording artist. In the 1930s, he switched to the Hammond organ and became a freelancer. In the 1940s, he authored instruction books on organ and taught organ lessons.

Early years
Crawford's father died when he was one year old and his impoverished mother placed the baby in an orphanage asylum near Woodland, California. He taught himself music at the orphanage, and by the age of nine he was playing a cornet in the orphanage band. At age 14 he left the orphanage to play piano in a small dance band, and then took a job playing piano in a ten-cent-admission silent film house.

His early theatre organ experience was at Washington's Spokane Gem Theater in 1911 and at the Clemmer-owned Casino Theatre (on an eight-rank Estey organ). He next played briefly at theatres in Billings, Montana, Spokane, Washington and Seattle. When he met Oliver Wallace, Crawford learned about the then-new types of theatre organ sounds. Crawford’s next jobs were playing at the Strand in San Francisco and the Mission Theatre in Los Angeles.

1920s: Silent movie organist
In the 1920s, he became well-known, and was dubbed the of "Poet of the Organ" for his style of playing ballads. In 1921, the Balaban and Katz theatre chain hired Crawford to Chicago to play its 29-rank Wurlitzer in the Chicago Theatre. Next, Crawford was hired as the organist at Grauman's Million Dollar Theatre in Los Angeles, playing a large Wurlitzer theatre organ.

From 1926 to 1933, he performed at New York City's Paramount Theater, with his wife Helen Crawford (also an organist) playing a twin organ console.

After some recordings for the small local Autograph Records label, Crawford made a series of records for the Victor Records label which proved very popular with record buyers. He had hits such as "Rose Marie", "Valencia" and "Russian Lullaby". Other popular songs included "At Dawning" and "Roses Of Picardy".

1930s: Hammond organist
With the end of the silent film era, work for theatre organists in movie houses dried up. Crawford played a Kilgen organ at Chicago's Century of Progress World's Fair in 1934, and in 1936 he got a job as staff organist in NBC studios in Chicago. In the 1930s, Crawford switched to the Hammond organ, and began playing engagements across the US. In addition to his numerous sound recordings, Crawford recorded player organ rolls on the Wurlitzer "R Rolls" system. His own compositions included "Vienna Violins", "Louisiana Nocturn", "Harlem Holiday", and "Hawaiian Honeymoon".