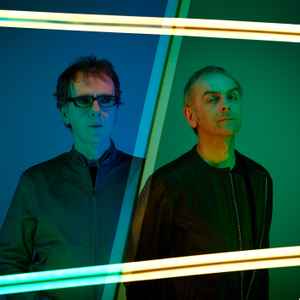 What must not be forgotten is that in addition to their own albums, they did masses of remixes for other artists when Darren Emerson was in the band. As far as I can count seeing the credits listed here at Discogs, they produced over 35 remixes during 1992-1997, that is 6 hours of music!

It can be difficult to distinguish what is an Emerson and what is an Underworld remix, as for example Everything But The Girl's 'Before Today' is listed on different releases as both "Darren Emerson Underwater Remix 1" and "Underworld Mix"

Underworld are awesome. I first heard Cowgirl when I was a pre-teen back in the mid '90s and it was the greatest thing I ever heard in my life, especially considering no music ever piqued my interest up until that point. However, I had no idea who the artist was or what the track was called. Years later when I was about 15, I figured out that it was Cowgirl by Underworld and immediately went to the record store to buy Everything, Everything and Dubnobasswithmyheadman. Now, I'm a huge fan and own most of their discography.

After listening to them over the years, I find that Underworld shines brightest with their improvised jams, live shows, and extended versions of their tracks. Whereas many artists only settle for 3 to 4 minute tunes or DJ-friendly cuts with lengthy and repetitious intros and outros, the best Underworld musical experiences are epic 10 to 20 minute pieces that take you on a journey without ever overstaying their welcome.

Therefore, I'm very happy that Underworld has started opening their vault over recent years by releasing never-before-heard versions of their tracks via Super Deluxe album editions and digital downloads. For example, Drift Series 1 - Additional Releases contains some of their best music complete with DJ mixes, improvisations, and ambient soundscapes which clocks in at 5 hours and 43 minutes total - just a bonus download that you get for buying their 8 disc album. Well, thanks, Underworld; I can't wait to see what else you have in store for your fans!

October 14, 2020
They are simply the soundtrack of the 90ies in every fakkin way. Raw, but heavy and happy partying Raver. Forward ever, Backwards never....
Reply Notify me 2 Helpful

February 16, 2020
Underworld is bangin', thanks mates for so many years of great tunes!
Reply Notify me Helpful

Wikipedia lists some versions of Underworld singles that are not on here (Discogs).
(Complete with record label, cat.nr, etc.).
Should they be added to Discogs?
I'll be happy to do so. Just thought I should ask first.

January 5, 2017
With a groundbreaking sound that obliterates the dividing lines between Techno, Trance and Breakbeat stylings, Underworld bury a subtle Indie Rock attitude slightly beneath the textural surface of their blissful synthetic insanity. With the drop of each new release, this U.K. sensation proves their worthiness as one of the most innovative and important dance fusion acts of the 1990s. Accredited as heavy hitters in the struggle to bring dance music to the attention of the mainstream, electronica darlings Underworld continue to draw an impressive fanbase on both the international club scene and the airwaves with their widely influential style that blends electronic intricacy with king-size, floor-friendly grooves.
Reply Notify me 4 Helpful

Underworld are clearly masters of their craft. Even so, it's important to correct some misperceptions about them, since it seems some techno fans, even paid critics, don't appreciate the full range of their output. Some of this is to be expected. Some just think of them as that rock-dance act that did that "Born Slippy" thing. Hmmm.

First off, for cats who love to write them off simply because they do have a vocal, lyrical and guitar dimension to their music, perhaps one should consider that limiting the definition of techno music or electronic music not only is backwards (both Kraftwerk and Juan Atkins used vocals and the electric guitar was essentially one of the first synthesizers), but it also narrows music's creative possibilities.

But if that is not enough for you to reconsider or expand your mind, then at minimum, you should know your history. And if you listened to the ORIGINAL instrumental breakbeat version of "Born Slippy," the ambient tidal groove of "Thing In A Book," the ode to joy of "Rez," the bubbling "Peach Tree," the crashing "Kittens," the scratch static of "Rowla," or the cosmic lightning of "Cherry Pie" -- all pure electronic instrumentals -- and you still think they're whack, then my assessment is you're simply hating to hate.

If you're open beyond this more instrumental side of Underworld, then the rewards just grow. You have the echoey groove of "Dirty Guitar," the demon genie of "Spoonman," the electro hoedown of "Cowgirl," the Art of Noise house of "Eclipse," the ecstatic "Spikee," the warping "Juanita," the time elastic "Pearls Girl," the electro blues of "Mosaic," the dark trance of "Burts" and "Dark Train," the weirdly hypnotic "Luetin," the moody ride of "Bird 1," the skittering boogie of "Best Mamgu Ever," the Blade Runner sunset of "Beautiful Burnout," the human soul blooming in a robot brain of "Faxed Invitation," the Route 66 kicks of "I, Exhale," the Arthur Russell echo of "Ova Nova," the post-New Order flight of "Nylon Strung" -- the list goes on and on. Really it's ridiculous.

And then there are the remixes for others, many of them revolutionary at the time and still deathless, of 108 Grand's "Te Quiero," the dub symphony of Leftfield's "Song of Life" as Lemon Interupt (used on FSOL's mind-bending radio Test Transmission 2), the looping funk of Mental Generation's "Cafe Del Mar," the aquatic head trip of William Orbit's "Water from a Vine Leaf," the galloping remix of Drum Club's "Sound System." And on and on.

Hawtin, Moby, the Chems, Prodigy, Orbital, even the more purist greats, Black Dog, Jeff Mills, Underground Resistance -- all stellar -- but in my book, Underworld are truly one of a kind. But that's for another time.

April 3, 2016
Very influential band! Highly influential to other forward thinking musicians, with many collaborations from early on. Underworld, to me are a very refreshing sound, even now in 2016.
Reply Notify me 2 Helpful

Underworld indeed is one of the best british electronic music acts. And before that they were quite good rock band. I love and respect them. But I agree that many people overrate them, especially today. Dubnobass... and Second Toughest In The Infants were perfect, I added them to my list of the best conceptual albums ever created. The next album Beacoup Fish ruined all this, I consider it as their worst work, maybe Darren was thinking the same and eventually left the band. After that Karl and Rick made some good music (Bird 1 and Scribble from the last album are very strong IMO) but overall work was much more 'plain' than before.

One important thing about Underworld is that people try to find some meaning in their lyrics. This is a mistake because Karl Hyde uses his voice only as a musical instrument. His words really make no sense because they are developed to fit into the sound, to be in harmony with the synthesisers. They have no meaning at all and I totally love this unusual approach because it sounds great ;)