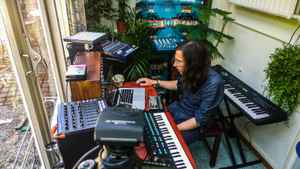 February 5, 2022
I run a very small Legowelt fan club on Discord, if anyone wants to join I can PM them an invite
See 2 replies

What I really love about Danny Wolfers is that he is able to be (and stay) his authentic self, both as an person aswell as musician / producer / artist, and this is very well visible and reflected in his music (and don't forget his drawings & website!). In an age were more and more people are starting to look the same, act the same, and create the same (basically the same on all aspects of life) Danny is able to just keep on doing it's thing without getting sucked into or being tempted by trends, fame or money ...
I find this extremely inspiring and as an artist myself I understand this kind of mindset. These sort of people are so rare nowadays and we should cherish and respect those people, and support them if you like what they are doing, ofcourse!

Even though his sound is not necessary what I listen to too much when I listen to electronic music, I still dare to call myself a 'fan' of Danny... simple because he's authentic!

April 5, 2008
His attitude is to serve and every serve is in. Legowelt plays the game with style and great accuracy. His first servings, although Legowelt himself self said it was just some 'probeersel', exactly hit home.
The man feels what the public wants and succesfully creates an advanced vision thereafter. Easily switching to whatever moniker he feels like containing the high standards he himself demands.
Every release is an adventure on itself. Danny can decide to create a masterpiece in a genre if he wants to. Signs of a musical genius.
With partners in crime Brian Schijf+, Lukas Petterson and ? they have created standards. Legowelt conjures up the world that is the musical dream you dreamt.
Mr. Wolfers not only has that touch but has demonstrated the touch while staying in touch with the underground. Needless to say that he is admired by the lot of us.

May 5, 2004
First of all, I really do NOT agree with above...ladies and gentlemen, let there be no doubt..this man is a living genius!
Indeed... all of his pieces of musical art contain that special legowelt sauce which makes every single track a euphoric, intense, adventerous and obscure thrill ride you want to make over and over again and leaves you begging for more after it touched your soul..
All of his tracks, especially the ones on the Pimpshifter LP are timeless, in fact in about 60 years from now your grandchildren will dance on 'total pussy control' on their prom nights and 600 years later robots on the planet Utopia will be doing the same on his dirty, sleezy obscure ghettofunk synth-soundscapes....
No people...this man...this man is the fucking Elvis of our time...
See 1 reply

April 2, 2002
I was listening to some tracks from 'Wirtschaftswunder' and 'Pimpshifter' last night, and found myself wondering why Legowelt hasn't blown up yet. Part of me hopes it won't happen, since things tend to be better when they stay relatively underground. Still, Danny Blanco's music is so infectious that I wouldn't be surprised if Legowelt is as popular as Daft Punk someday. Legowelt's music is like that--it's beat-heavy, uptempo, and killer on the dancefloor, but it's interesting and varied enough to be enjoyable for armchair listening, too. I'd recommend Legowelt (and Legowelt vs. Orgue Electronique) to anyone who enjoys melodic, danceable electro.