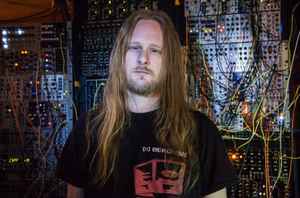 While his name is often connected to the "Breakcore" tag, that name alone tells not that much.
Venetian Snares is mostly known for hypersonic "breakbeat" music, but he combined those sounds with various other musical influences.
His early works focus heavily on distortion and gabber kicks, while he later would experiment with synthesizer ambient music, nintendo and game boy sounds, and even have classical music instruments playing, all this having been combined with the sound he made his trademark namely the over-edited hyper-fast breakbeats.
That is undoubtedly the work of a man who loves to experiment, and to give his audiences a variety of sounds!

I've seen crusty punk dreadies, well-tailored jazz-loving hipsters and thightly-shaven, sporty-dressed gabber-jocks, who all would agree on little else, yet all have been part of audiences that went berzerk while dancing to Venetian Snares. How many electronic artists can reach such a diversity of people and create something to entice all of them into his audial adventures?
My entrance to his music was also via the gabber scene, and my favourite work of him are still his more gabber-influenced works.

Looking at the fact that he continuously reinvents his style and manages to steer his Snares project into various other directions, which then in turn adresses newer audiences, I can in conclusion only be amazed at his musical output!

August 25, 2022
No breakcore artist Ivan ever be as iconic as him. Old but gold

April 19, 2022
Agree with JVW_NE. Turned the ecstatic rush of jungle into an unfortunate gimmick. More like a series of very dull sound effects than music or even noise. Caught him live at festivals a few times and his lives sets probably hold the attention if you've taken enough drugs.

March 2, 2019
Intricate, dynamic, tension ridden tumbling asteroids of mutated drum n bass. Occasionally a nice melody or voice. The amount of music he has released is almost inhuman. The only other artist I've seen that has released more is Milieu. Been listening to him since his Music for cats lp. What an amazing ride. Now it's time to get all of it on vinyl before the prices rise out of the atmosphere.

July 14, 2018
Amazing talent. Unemcumembed and driven to sculpt in his own image, vsnares is on an island in his particular mode of craft. Be it Winter in the belly of the snake and it's masterful twisted intimacy, doll doll doll's dark math genius, My downfalls innovative cinematic break core, early frenzied material or later material, there's no peer to his breakneck delivery and uncompromising individuality. An unapologetically multi faceted musical challenge in intensity and ability, vsnares body of work is an incredible achievement.

October 25, 2015
probably my favorite artist of all time. period. an absolute genius, he has such a signature style and sound but simultaneously leads a very dynamic and huge discography. you never know what to expect from this man. his passion for music shows in his music, he'd die without this hobby. bless him.

May 22, 2015
absolutely bonkers mentalist gabba speed freak...a lunatic genius and breakcore madman...probably the greatest composer who has EVER lived...this man knows NO bounds...he will be relevant in a thousand years time...never mind fifty or a hundred
See 1 reply

March 20, 2015
What can I say about Venetian Snares. His music makes me want to take a nap, I don't know why. It's pretty good, but it makes me doze off y'know. I like the thing he did with dj fishead and his records on Addict are pretty good. But everything else, just makes me so sleepy.

I quite enjoy the time I spend sleeping so that's a pretty huge plus for me. I started listening to Funk's music when I was in my final year of college and I gotta tell you, a lot of my getting familiar with it was sleeping on the bus on the way. His melodies are really easy-listening especially if you're into hard breakcore, like Steve Albini or KC and the Sunshine Band.

I highly recommend checking out print(schiver) or whatever and the skelechairs and moonglow 12"s on Addict. If you're a hipster who is just looking for your fix listen to the ultra-up-it's-own-ass Ross from friends cillit bang or whatever i don't even know what language that it (probably french cause that seems like a french thing to do).
See 1 reply

February 18, 2015
As of recent, Aaron has re-released a few of his limited edition records in FLAC format through his Bandcamp.
The re-released EPs in question are:
Moonglow/This Bitter Earth, Badminton, and Clearance Bin (off of his Snares Man! pseudonym).