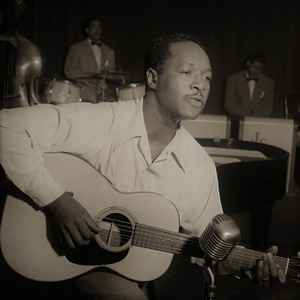 Real Name:
Joshua Daniel White
Profile:
Josh White (born February 11, 1914 in Greenville, South Carolina, died September 5, 1969 in Manhasset, N.Y.) was an American singer, guitarist, songwriter, actor, and civil rights activist.
Some of his recordings in the mid-1930s were released as by Pinewood Tom.
Josh White was one of the most popular and influential folksingers in America in the mid-20th century. His most famous song, “One Meat Ball,” is about a poor man who has little money to buy dinner and who gets little sympathy from the waiter serving him. The folk music genre has often had a strong social and political foundation, and White’s career is a clear example of that; he sang for President Franklin Roosevelt at the White House in the 1940s, he suffered from the effects of McCarthyism in the 1950s, and he was a featured performer at the 1963 March on Washington.
Father of Josh White, Jr..
Sites:
Wikipedia
Aliases:
Paul La France, Pinewood Tom, The Singing Christian, Tippy Barton
In Groups:
Carver Boys, Josh White & His Carolinians, Josh White Trio, Pinewood Tom And His Blues Hounds, The Carson Boys, The Josh White Orchestra, The Union Boys
Variations:
Viewing All | Josh White
J. White, Josh, Josh White (Pinewood Tom), Josh White (The Singing Christian), Josh White And His Guitar, Josh White, Sr., Joshua White, Joshua White (The Singing Christian), Joshua White As Pinewood Tom, White