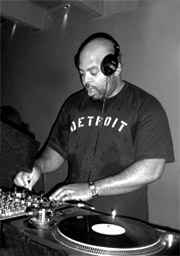 Real Name:
Eric Dulan
Profile:
DJ Bone is one of Detroit's most coveted underground vinyl technicians. This very talented and highly sought after artist plays events and clubs worldwide, has held a residency position at four of Detroit's top clubs and produces music inspired by the city in which he lives, Detroit. His record labels Subject Detroit and Encounter are futuristic and unearthly while still displaying the true essence of Detroit's Techno Soul.
Bone experienced the emotion, passion and energy of Detroit Techno first hand at the infamous Music Institute. What he witnessed there, along with the eclectic mix of music filling Detroit's airwaves by the legendary Electrifyin' Mojo and The Wizard, along with Detroit's industrial backdrop, would serve to be Bone's main influences. He his DJ career spinning groundbreaking sets weekly at The Love Club (The Shelter). From there he gained a dedicated following which eventually led to him playing at three different clubs five nights a week as well as several underground parties in Detroit. An invitation to provide fortnightly, live mixes for the Deep Space Radio show on 107.5 in Detroit was also extended.
Sites:
dj-bone.com, Facebook, MySpace, Twitter, Bandcamp
Aliases:
Differ-Ent, Eric Dulan, Subject No. 1
Variations:
Viewing All | DJ Bone
Bone, DJBone

July 31, 2015
If I were forced to name my five favorite producers DJ Bone wouid be on that list.
I MUST SEE HIM DJ.

February 4, 2014
Dj Bone is probably the most "into music" dj I have ever seen & heard.
All what he does is dedicated to music and not to his own person. It's sad that he never get the credits he deserves imho.
I've seen him playing twice, where the last time I saw him, he was actually crying during his mix while playing a song of Aaron Carl shortly after his death (true story, happened in Groot-Bijgaarden in Belgium), don't think there are much djs that could / would do that.

You got my respect forever mister Dulan
See 1 reply

I think there is not enough credit given to this man for his production ,his skills on the turntables have been proven to me time and time again in Dublin.
This guys production for me is from another planet ,but still keeps a certain earthy feel to them eg "ship life" ep.
Tribal beats with futuristic basslines and slightly twisted robotic strings of "space bounce" or his metroplex release "riding the thin line".
If you have'nt been payin attention to this guys production.....Watch Out!!!!

DJ Bone is a great personality. Always friendly towards his fans and a real hard workin' guy on the tables! Though looking a bit like LL Cool J, he's got Detroit in his heart and in his hands. Not that clear and monotone than Mr.Mills and others, but always hard and banging!