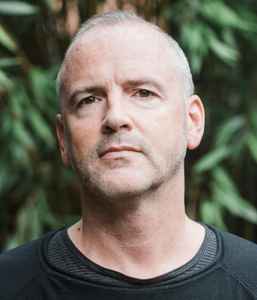 July 18, 2022
Working under many labels and twice as many pseudonyms, Thomas P.
Heckmann has kept true to traditional techno methods and resources.
Heckmann was one of the first in his native land of Germany to explore a
style of techno that is comparable with early Underground Resistance and +8
recordings. Thomas’ tracks are strong with sounds that originate from the
303 and use of the four/four rhythm. His most well known contributions
come from working with, his own label, Trope Records, Force Inc. and his re­
leases under the names Drax and Age. He has also recorded under the names
Exit 100, Skydiver, Spectral Emotions and Purple Piejade—to name a few.
Heckmann started tinkering with techno when he was 11 years old, find­
ing a niche with the second generation acid techno style. He was lead there by
his fondness for early KLF and 808 State. Heckmann’s first recording. Liquid
came some years later and was under the name Exit 100 and for a new Frank­
furt label named Force Inc. The 1992 release brought a lot of attention to the
still young Heckmann, landing him a deal to have Liquid licensed to Daniel
Miller’s English label, Mute Records. It gained him high marks from Melody
Maker Magazine and reached No. 20 on the 1992 French independent charts.
Shortly thereafter, using the name Age, Heckmann released Trope. The song
was a hit, and is considered a staple in the trance techno fan diet.
In the early ’90s Heckmann left Force Inc. and ventured over to Labworks
Records in Germany under the name Spectral Emotions. There he collabo­
rated with label mate Hoschi to do a release for the Holland based label,
Djax-Up Beats, under the name Purple Piejade. The same year, a collection of
his releases as Age were pulled together for 1993’s Early Sessions and Out­
takes. In 1993 Heckmann also released his last single as Exit 100, entitled Cir­
cuits. With the death of Exit 100, came the birth of Heckmann’s label, Trope Records
and another music personality, Drax. Its with his own label that
Heckmann would release his applauded Amphetamine, which put Heck­
mann back on the 1994 French charts at number 20, under the Drax moniker.
That year, Heckmann started another label, Acid Fucker Unite (AFU), which
was more focused on the die hard acid techno sound. On AFU, Thomas
recorded as Silent Breed and Electro Nation. He put on the Age mask again
in 1994 for The Orion Years. Going into the late nineties Heckmann further
proved his dislike for crediting his own name by adding the alias’s, TPH, 8-bit
Science, Stromkland, and Metric System, to his recording roster.
After a four year separation, Heckmann returned to Force Inc. as Age for
the appropriately titled 1997 single, Return to the Force and the album Iso­
lation (1998). In 1998 Heckmann started a series called Welt In Scherben
(World in Fragments). A year later, he released the third installment in the se­
ries, a 12”, that combined Thomas’ traditional use of far out space sounds, the
303 and hard, German dancefloor rhythms. In 1999 Heckmann took a break
from the aliases and used his real name for two full-length CDs, Raum, and
the fifth volume of the obscure Welt in Scherben, in May and October, re­
spectively. —Diana Potts

December 31, 2020
The man is a true legend!! A pioneer in electronic music, carving his own path and creating some of the finest electronic music ever! I have followed his music most of my life and will always treasure his early recordings. The Drax and AGE projects being my favourites. Brilliant!!

Really comes across about as genuine as they get...

August 18, 2018
djs, produces, manages his own label, does audio mastering, collects and restores synthesizers....is there anything he cant do?

July 1, 2018
Relentless producer, big vinyl collector and all-round good guy who is a great ambassador and should be regarded as a living legend of the scene.

Thomas P. Heckmann, it's a name you know. When you went looking for records back in the 90's-00's (in real record stores), if you saw Drax or his name on a release you'd instantly want to hear it.

His own work (amongst which Amphetamine is the most well-known), or his remixes.

You were simply guaranteed a great piece of work.

And, listening to his remix of Programmed, I am happy to say that the master is still in full effect.

Quite simply, a legend.

March 29, 2015
Heckman is the pinnacle of German techno beginnings. Hard, abrasive, melodic and climatic. He can do different styles as well. And in his later years has now fully delved into full ambient albums. His name might be more famous if he followed trends like trance. You won't find much more dance floor destruction then on his Drax releases. So aggressive and mind melting that you don't need any mind altering influences. Just turn off the lights and watch the vinyl spin. Still underrated after all these years...

Heckmann's techno is at its peak when he gives us his take on EBM. He's the master at peak-time stormers, with sawtooth basslines and excellent use of sounds and percussion underpinning them, usually accompanied by an excellent denouement i.e. EBM 1 and Sundancer. Further, his remixes tend to rework the original track completely, into something that's usually a big improvement on the original.......