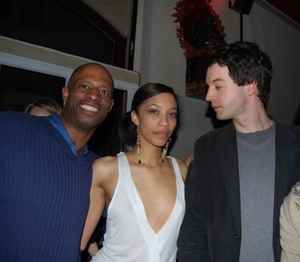 Profile:
Afro Medusa is a British dance music trio, consisting of the vocalist Isabel Fructuoso, Nick Bennett and Patrick Cole. They placed two songs on the US Hot Dance Music/Club Play chart, beginning with "Pasilda", which hit #1 in 2000. In 2002, they climbed to #26 with "Dreams". "Pasilda" also reached number 31 in the UK Singles Chart in October 2000.

In 2005, the project came out Isabel Fructuoso. After that, the remaining participants attempted to save the project and in the next release one-time Heidi Vogel was invited to the vocalist. In 2008, Cherie Harris joined the project. In this lineup, 2 releases were released in the same year. In 2014, the musicians released the single "Diving In Your Soul", which is the last one at the moment. It features vocals from Emily Dell.
Sites:
afromedusauk.com, Facebook, MySpace, SoundCloud
Aliases:
Afro Angel
Members:
Cherie Harris, Emily Dell, Isabel Fructuoso, Nick Bennett, Patrick Cole
Variations:
Viewing All | Afro Medusa
Afro Médusa, Afro-Medusa, AfroMedusa, Afromedusa