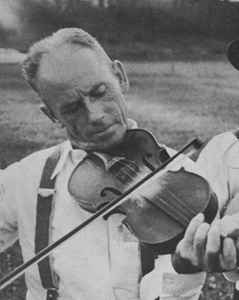 Profile:
July 16,1915 - September 13, 1987 - Fiddler from Northeastern Tennessee. One of the finest of the Old Time fiddlers. Fred's fiddle got him through school and helped him and his buddies through World War II, where he was a member of the elite "Merrill's Marauders." Married Mattie Howard and had two children, Lois Ann and Kenneth, both of whom still carry on the family's musical tradition. During the Folk revival of the 1960s, Fred and his fiddle toured with Tom Ashley, the young Doc Watson, and Clint Howard. Among the many venues they played were Harvard, Newport, Greenwich Village, and the Smithsonian.
Sites:
longjourney
Variations:
Viewing All | Fred Price
Fred, Price