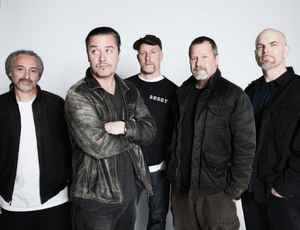 Profile:
Faith No More was formed after the breakup of Faith. No Man.. They underwent several lineup changes including a period of where they would play 'open mic' shows where they'd invite people to take on vocal duties. Courtney Love and Paula Frazer were two of the temporary vocalists which occasioned the mic at these shows.

They were signed to Slash Records and released 'Introduce Yourself' in 1987. This album spawned their first hit 'We Care A Lot'. Due to tensions within the band Chuck Mosley was fired prior to the recording of their third studio album 'The Real Thing'. Mosley was replaced by Mike Patton.

'The Real Thing' was released in 1989 to critical and commercial acclaim. It featured another rock/rap hit called 'Epic' plus a string of other minor hit singles. 'The Real Thing' was the first album by the band to achieve platinum sales figures in the US.

Their fourth studio album 'Angel Dust' the second with new vocalist Mike Patton. The album met critical success and is often deemed their most important record. It is often cited as the album which gave birth to Nu-Metal. This album’s darker themes, frequent genre changes, Patton's maturation and vocal versatility, were a drastic shift in artistic direction and saw another rift open, often publically between the band and guitarist Jim Martin. Jim Martin was sacked via fax following the 'Angel Dust' tour in late 1993.

In 1995 after auditioning several guitarists including Killing Joke's Geordie Walker, the band hired Mr. Bungle guitarist Trey Spruance and recorded 'King For A Day, Fool For A Lifetime'. Trey Spruance completed the record but made it clear that touring the record would not be possible. The band hired Dean Menta to fill in for the tour. The album had a mixed critical response which was followed by lukewarm album sales which led to the cancellation of part of their 1995 European tour.

During the writing for 'Album Of The Year' the band replaced Dean Menta with Billy Gould's former room-mate Jon Hudson. Hudson was heavily involved in the writing of the album, helping with all three of the released singles from 'Album of The Year'. The album was received well both critically and commercially compared to 'King For A Day', but it became clear that due to conflicting side projects that Faith No More would either have to end or be put on hiatus. With Mike Bordin joining Ozzy Osbourne's band, Mike Patton committed to Mr. Bungle for the foreseeable future and Roddy Bottum moonlighting with Imperial Teen the band chose to split amid weeks of rumour and speculation. The announcement was made by Billy Gould via email on April 20th 1998.

January 23, 2022
FAITH NO MORE is a great band (one of the bands that stands out from the rest), my favorite albums from them are the following ones:

August 22, 2016
Faith No More is for me one of the most awesome bands to exist in the history of ever.
Reply Notify me 10 Helpful